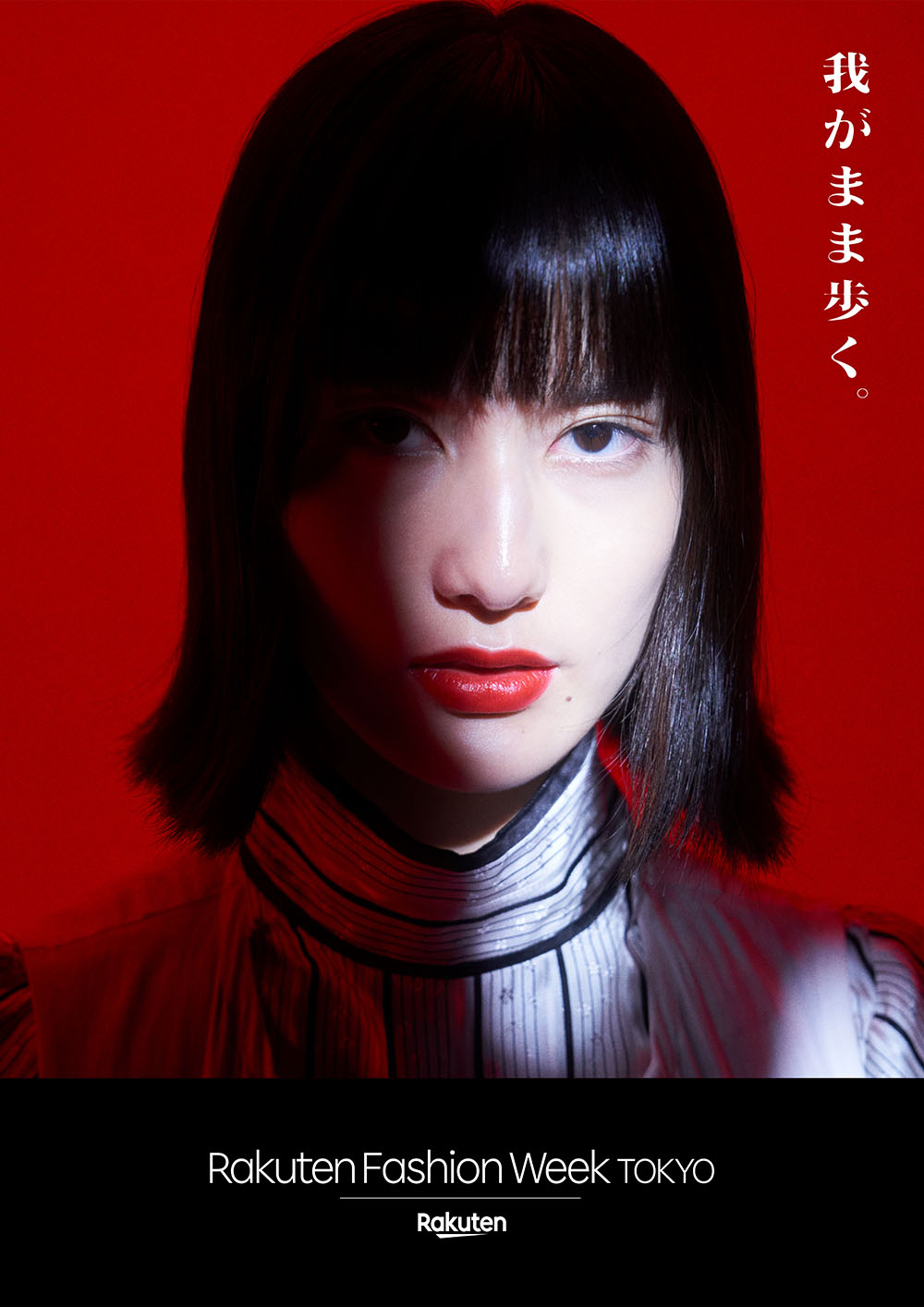 Words flattening due to the rise of SNS,
Becoming an age in which anybody can transmit freely,
Without being influenced by title or organization.
An age in which, what is said is more important than who said it.

Now that everything is moving towards the next stage,
The most important thing is not to be tied down by common sense,
To possess a strongwill and your own style.
Yes, with a red flaming-like passion.

What is it that fashion can do.

“Living your self” is the ultimate weapon in fashion.

The ability to freely express “living your self” is fashion and style.

“Live your self” = Be selfish.

“Live your self” means to possess a free imagination and fast will, to live yourlife (fashion) befitting your self.

By carrying through your own style, new values are born.

So, get dressed in your self-style, and go enjoy the town.

For the new world we are creating, you and me.

Model
Ai Hashimoto
Born in 1996, at Kumamoto prefecture.
In 2010, played the leading role for the first time in the movie, “Give and Go”. In the same year, gathered attention in her role in the movie “Confessions”, appearing in many works since
In 2013, awarded many movie awards in the movie, “The Kirishima thing
In recent years, has appeared in NHK taiga dramas“Segodon” (’18) and “Idaten” (’19) for 2 years consecutively. In “Seiten wo tsuke” of the 2021 fiscal year, she plays her first taiga drama heroin (leading actress role).
In December 2020, her singing of the song, “Momen no handkerchief (cotton handkerchief)” in “THE FIRST TAKE” has gathered attention, and is participating in the “Kyohei Tsutsumi tribute”, on sale in March 2021.
Utilizing her unique sensitivity, is active in a wide range of fields, including writing a series on fashion for the photographic magazine GENIC (SPUR.jp).

Joined BEAMS in 2000. As the buyer of the men’s division, visited countries around the world, centered mainly around cities holding overseas fashion weeks, in charge of the buying of fashion brandsand culture related good for 14 years. Along with duties as a buyer, at the same time, was also involved in the launching of new projects, participating in the launching ofthe overseas affiliate in UK, BEAMS & CO. UK LTD in 2017, with its main business in being a creative agency. In addition to directing the support of overseas advancements and/or activities of Japanese companies, brands, people to Europe, BEAMS & CO. UK LTD plans capsule collections with global brands, events at overseas fashion weeks, etc. Furthermore, as the person in charge of global market businesses, leads business developments in the U.S. and Asia also.From January 2021, is widening his sphere of activities as the Creative Director of ‘BE AT TOKYO’, launched under the concept of being the Cultural Apartments to give birth to never before seen yet cultures from Tokyo.

In 2015, started his career as a full-blown Director of live-action movies. Has directed many MVs regardless of major or indies artists. In March 2017, was published in the “Top 100 Filmmakers”, a directory which selects and introduces the top 100 outstanding filmmakers
In September 2017, “Bokyaku featuring KOHH”, the MV of Hikaru Utada which he had directed, was awarded the Best CollaborationVideo Award at the 16thMTV Video Music Award Japan, sponsored by MTV JAPAN.
In March 2018, in the SPACE SHOWER MUSIC AWARDS 2018, sponsored by SPACE SHOWER TV, he was awarded as the “BEST VIDEO DIRECTOR”, awarded to the most outstanding Director of the year, being the youngest director (as of 2019) to be awarded this award.
In 2019, the MV of Wednesday Campanella’s “The Bamboo Princess” was awarded the Rookie of the Year award of the 22ndJAPAN MEDIA ARTS FESTIVAL entertainment division. In addition, the TVCM of PARCO which he directed, was also awarded at this FESTIVAL.
In November 2020, awarded the movie/graphics/art division award at the 17thBest Debutant of the year award. As for overseas crafts, in 2018, the MV of Wednesday Campanella’s “The Bamboo Princess” was selected in the Shortlist of the Ciclope Festival 2018, Production Design division. The MV of Wednesday Campanella x yahyel “Survive Tokyo” was selected in the Shortlist of the Cannes Young Director Award 2019. In both cases, he was the only Asian director to be selected within the category.
Since 2015, has also started activities as a member of theelectro band yahyel, participating in various music festivals in Japan, along with tours and participating in festivals at various locations in the US and Asia.