1979 Born at Gunma Prefecture.
After graduating from MODE GAKUEN, gained experience as a corporate designer, and afterwards, handled the planning/production of shoes/accessories at MIHARAYASUHIRO. After which, started up “doublet” with pattern-maker Takashi Murakami, making a debut with an exhibit of their 2013 S/S collection.
2013 Awarded the “2013 TOKYO NEW DESIGNER FASHION GRAND PRIX” Professional Category and chosen as its business support designer.
2017 Chosen as an award winner of “Tokyo Fashion Award 2017”, thereby holding exhibits at Paris, and making a runway debut at the 2017 A/W Tokyo Fashion Week.
2018 Grand Prix winner of the “LVMH YOUNG FASHION DESIGNERS PRIZE”.
2020 Gave their first presentation at the 2020 A/W Paris Fashion Week.

Being selected as one of the award winners of the “TOKYO FASHION AWARD 2017”, doublet presented 2 seasons of exhibits at Paris, along with the brands’ first runway show during the 2017 A/W season Tokyo Fashion Week. With such steps of experiences, the next year, in 2018, they became the 1st Japanese to achieve the feat of winning the Grand Prix of the “LVMH YOUNG FASHION DESIGNERS PRIZE” (LVMH Prize hereinafter), a prize established by LVMH (Moet Hennessy –Louis Vuitton) to support and nurture young promising designers. Thereby becoming a globally attention gathering designer in one leap, we asked their designer, Mr. Masayuki Ino, about influences and his state of mind after having been awarded, current status of the brand, and others.

Being awarded the TOKYO FASHION AWARD in 2017 and the LVMH Prize Grand Prix the next year, your overseas activities must have grown exponentially. What have such experiences of these past few years bring about for the brand?

Winning the LVMH Prize especially brought about large reactions, with a huge rise in both overseas acknowledgement of the brand and power to transmit, which I am truly thankful for. Furthermore, the factories and business partners I’ve been working with from the start of the brand, my mentor, Mr. Yasuhiro Mihara, who still helps me, and those people around me, were all very happy for me, and I feel, I have been able to be filial to my parents whom I’ve worried and troubled over the years. However, just because the level of acknowledgement of the brand name has spread rapidly, it doesn’t necessarily mean that it is reflecting our true ability, so although I am truly thankful for receiving this prize, I try to think of it as a reward and have been conscious of trying not to change the stance of the brand. 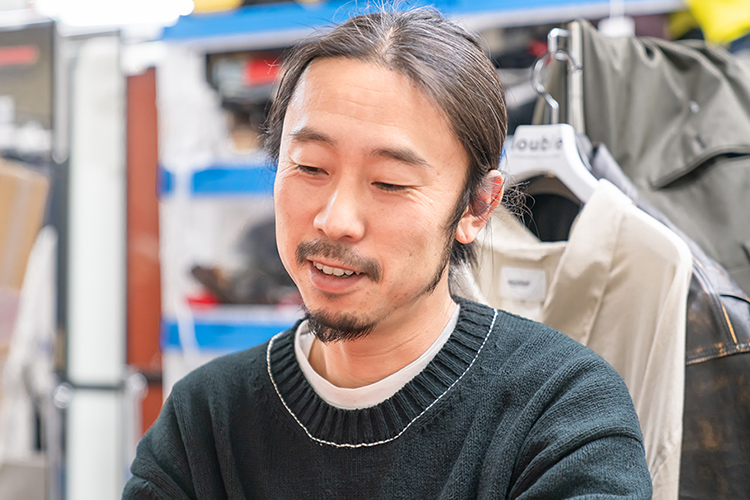 Your creation, being appreciated by renown judges, being awarded the Grand Prix over high-level competitors, to me, seems to be reflective of doublet’s true ability, is it not?

Of course, all that is such an honor, but I think of it as meaning that our brand has been appreciated by a prize hosted by LVMH, and not that we have been acknowledged by consumers. To explain using a comprehensible example, M-1 Grand Prix champion comedy pairs may see a sudden rapid increase in work after winning the championship, but whether they suddenly become one the top-line comedians whom are active and leading the comedy industry, is a completely different story. I realize I’m repeating myself, but I feel the brand needs to be able to stand on its own without depending upon this prize, and I have strong feelings to proceed ahead with both feet firmly on the ground.

What kind of specific support did you receive from LVMH?

During the year proceeding the award, I visited LVMH 3, 4 times for meetings, at which time, I received advice on what I need to do in order to advance towards the direction the brand wishes to go, advice on what the brand needs to do in order to establish a foothold, especially in Europe, and was introduced to people necessary to accomplish this. Support is basically for 1 year, but in the end, success is built on the relationship between people, so I think the relationships gained during this year will continue on hereinafter.

Has your business increased greatly after winning the award?

The acknowledgement level of the brand leaped all at once, so it was probably possible to rapidly increase business, but level of acknowledgement is not equal to the number of fans, and winning the award does not mean my creations became great all of the sudden, so I didn’t increase the number of shops I do business with. So, business wise, the number of orders has increased somewhat, but the business scale itself is virtually unchanged. LVMH probably thinks of us as a brand slow in showing results, and all I can say for that is, I’m really sorry to disappoint.

Did you feel some pressure after winning the prize?

No pressure especially, but I feel somewhat of a frustration that the message of what we are trying to do isn’t being fully conveyed yet. The spread of acknowledgement due to winning the award tends to be superficial, and I have strong feelings towards having people acknowledge our thoughts and feelings behind our clothes making, much, much more.

Are these feelings something you’ve had from before?

I think, the act of making things was, from the stone age, done to make someone happy. Compared to stoneware or axes which were daily necessities back then, fashion is a luxury item, an item of indulgence, but I think what lies at the base is the same and unchanged, which is to make things of good quality, interesting things, and make people happy, and I’ve always kept this feeling, up to now.

Creations filled with humor is definitely a large attraction of doublet, and it seems, this characteristic is getting stronger with each season.

Thank you. However, there are no manuals or equations which guarantees people will be happy if I do this, so from our stand point, although we don’t know what the correct answer is, we simply repeat pouring our all into doing what we think is the best, struggling every season with trial and errors until the last possible moment. 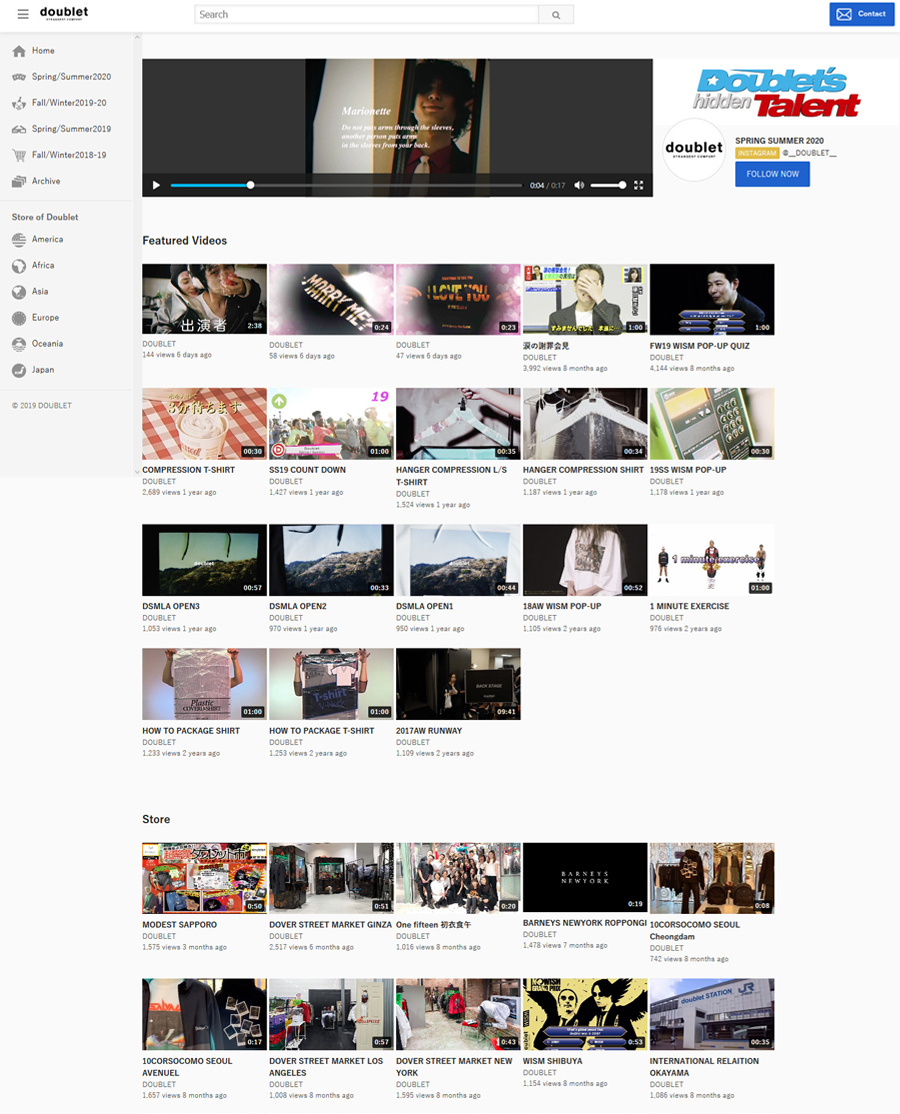 With your YouTube-like Web site and radio calisthenics-like movie, etc., we see a lot of playfulness in your communication efforts also.

In the past, we made a how-to movie comprehensively explaining how to wear, for a piece we received much comment that people couldn’t grasp how to wear. Surprisingly, this became a hit, and acquiring a liking to this, we began to do all sorts of things. As for our Web site, because communication is becoming an increasingly instant thing today, we thought it would be best to make a site in which we could update immediately once we shot a movie, but in reality, having actually started such a site, our reflection point is that we can’t update as often as we hoped (laugh). We don’t want such efforts to become a just do and that’s it kind of thing, so we keep in mind to follow up afterwards, studying people’s reactions, confirming whether there is a gap between what is being demanded and what we are doing. And thankfully, so far there are quite a few people enjoying what we are doing, which gives us the strength to somehow continue doing what we are doing.

You mentioned communication becoming increasingly instant. Do you feel such changes in what clothing mean to consumers, and/or changes in how clothing are consumed?

I think that depends on the individual. When I was young, there existed a sense of working hard in part time jobs to make enough money to buy clothing we want, and taking good care to wear that for a long time, but today, if it gets worn out or board of that item, one can easily sell it. I have no intention of putting that down. I think the existence of clothing, what it means to people and how people relate to clothing is subject to change according to time, and I simply think it’s a matter of understanding and considering how to deal with such changes. But as for myself, I hope to continue placing importance on enjoying what we do more than anybody, without being too concerned about the surroundings, or else, our creations will not touch anybody’s heart.

I have the impression that presently, doublet actively sells through collaborations with select shops, rather than directly operated shops or own EC site. Do you have any particularities about how your products are sold?

Personally, I think the best place to have clothing bought is at clothing stores. If we started our own EC site, it’s true that sales may increase, but at the same time, I fear that the joy of shopping might decrease for customers. Rather than buying a piece of clothing with one click on an EC site, I think the experience of getting on a train to get to a shop, trying it on and purchasing after much contemplation is much more memorable. Even if that person is to find something else which fits them better at the shop, I think in the end, that’s a good thing. 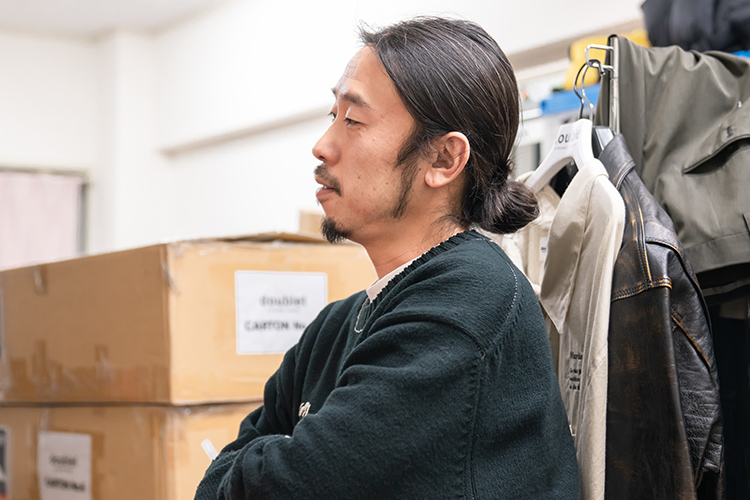 You are thorough and consistent in your attitude of having people enjoy what you offer. Finally, please tell us your future plans for the brand.

This may connect with what I spoke of how we sell, but I have the feeling that the method in which what we make is delivered to our customers will change largely from here. I don’t have any proof of this and it’s simply a skin-deep feeling, but I have the feeling that conventional ways of thinking and methods which have been mainstream up to now, will become increasingly passé. Like the how-to video mentioned earlier, I hope to whip up more original methodologies of doing things. In 2 years, doublet will be celebrating its 10th anniversary, so with the aim to welcoming our 10th year, we hope to continue doing our best.