Born in Osaka in 1988
Graduated from coconogacco
2014: Established RYOTA MURAKAMI
2020: Renamed to pillings

“pillings”, formally changing its brand name from “RYOTAMURAKAMI” in the 2021SS season. By reexamining their production system at the same time as changing their brand name, rarefied skills have been added to their conceptual and emotional expressionism, thereby continuing to grow as a brand whose creations continue to gather attention from around the world. As a brand with growing prospective to become a knit brand representative of Japan, we spoke to their designer, Mr. Murakami.

Has there been a turning point in the development of the brand since first launching your own brand in 2014?

That would be the timing at which I changed the brand name. It was a brand I started together with my mother, and continued on by myself thereafter, but I was approached by a Japanese company that carries skillful knit craftsmen, by which I become able to form a system to mass produce, and changed the brand name at that time. Because our production background strengthened, we were able to increase our number of styles, and it also enabled us to put into shape those things we wanted to do, which largely changed the way our brand is seen. We now have a system to mass produce, but our atmosphere hasn’t changed much from when we debuted, and we are continuing to create while discussing all sorts of things with knitters of my mother’s generation. 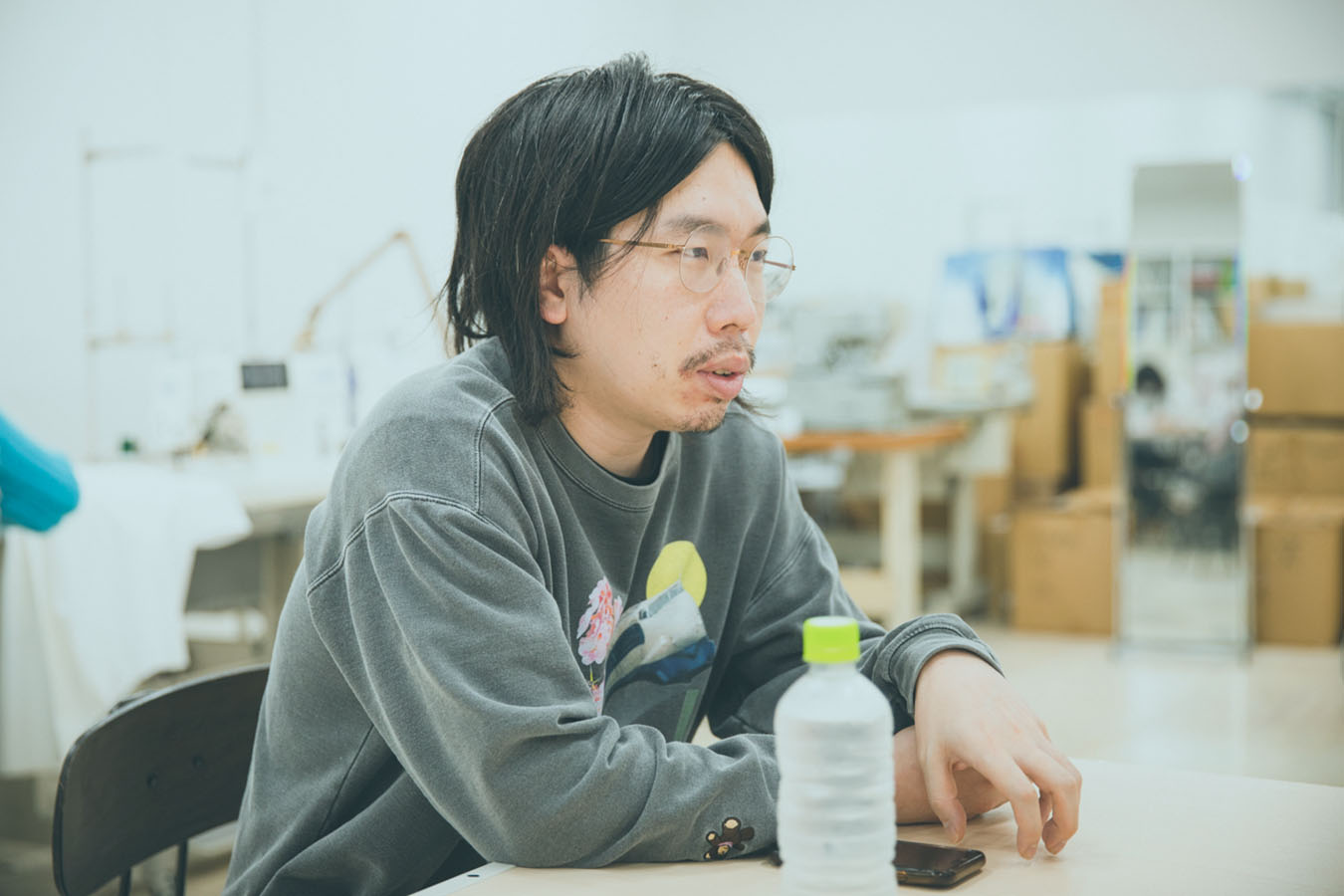 Please tell us how you came to aspire to become a designer.

In elementary school, one day I went to school wearing a sweater my mother knitted, and my classmates made fun of me. This experience made me become conscious of fashion. I had always been interested in making things, but personally, I was a comedy fan, and did a part time job of writing postcards to mid-night radio programs, so I wanted to become a broadcast writer when I was a junior high school student. TV programs like “Downtown-no gottsu-ee-kannji” were my favorite and watched them all the time, because I felt laughter was a creation that becomes a weapon for weak underdogs to survive in society, something that can change people’s sense of values. It was my wish to create clothes like laughter, creations which have the power to change people’s inferiority complexes or social values and that’s how I got started. I was also greatly influenced by Margiela. Even now, I remember I was greatly shocked by his creations, thinking he is the Hitoshi Matsumoto of the fashion industry.

What is your present motive force in creating clothes?

Nobody has asked me to do so, but I feel a sort of responsibility that I have to do this. I like people, and this is a motivator for me, so in my mind I’m thinking I’m making clothes for people who have trouble fitting in with their classmates. It is my wish to make clothes that make people with low self-confidence look attractive, or clothes that will appeal to such people.

To you, what is the attraction of knits?

Anything in thread form can be knitted, and originals can be made from scratch. That is the attraction. All sorts of things can be made depending upon combinations. I am also fond of the process of expressing by conversion of emotional expression to numerical form.
Also, including my mother’s hand knit sweaters, I think emotions, people’s feelings are easily transferred to knits. It is my wish to offer such things in fashion. In hand-knits, of course the level of productization must be the same, but every knitter has each’s own habit which comes out in the knit, and shapes change as it is worn for a long time, so you can say, each piece is a one of a kind. That’s another attraction. 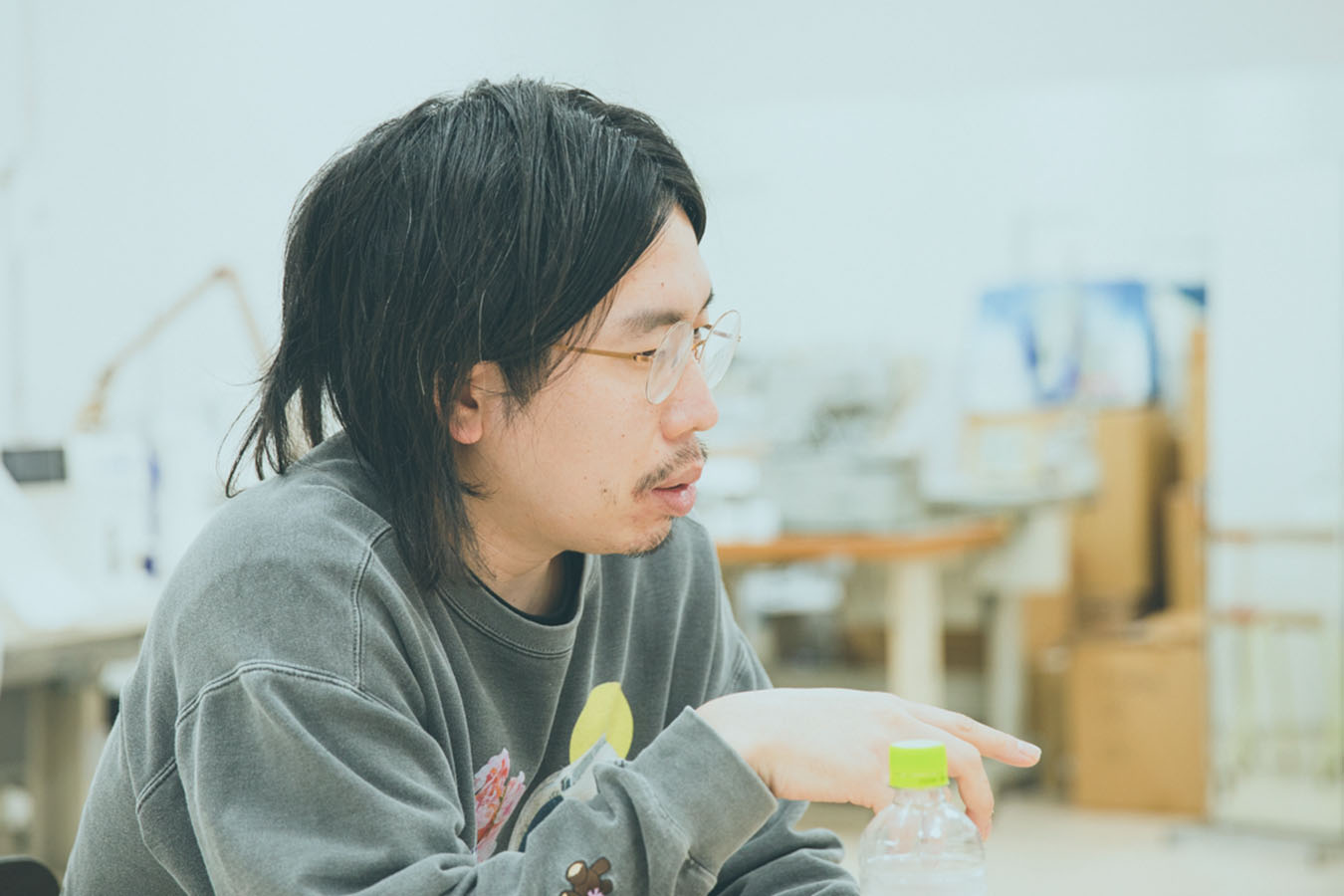 The runway show of the 2022AW collection you presented after having been awarded the TOKYO FASHION AWARD 2022 carried a strong message. We had the impression it was very different from your past seasons, but was there some aim to this?

From the time I changed the brand name to pillings, up to the 2022SS season, I had the wish to have people see the production background of knits, so I created designs that spot lighted personal aspects of knitters. I wanted people to grasp a total image of the brand, by understanding the sort of people we create with, and I continued this for four seasons. I think people now understand what kind of brand we are, so from here on, I wanted to create collections of things I want to express or messages I want to convey. The first of this was the 2022AW season, and it was a collection offered to people who find difficulty in living. 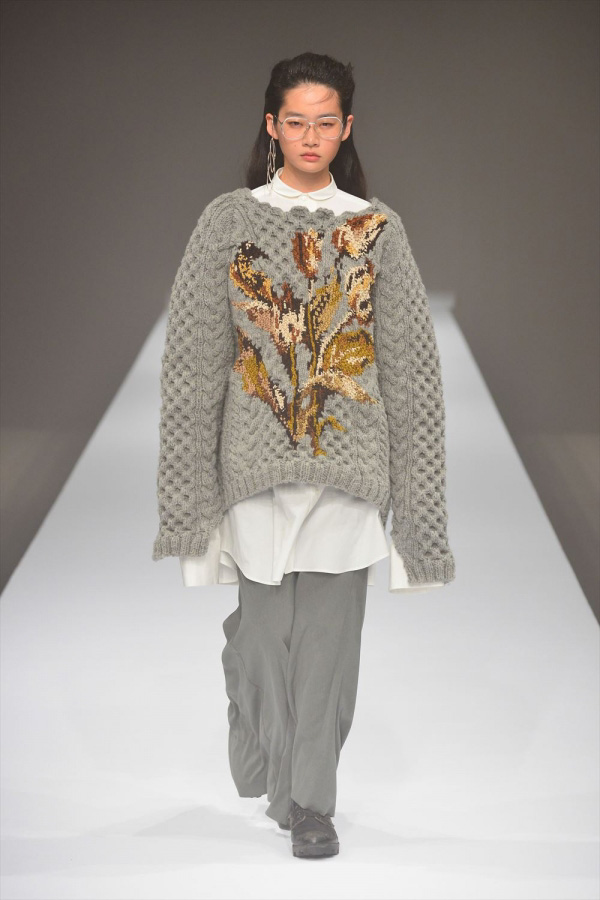 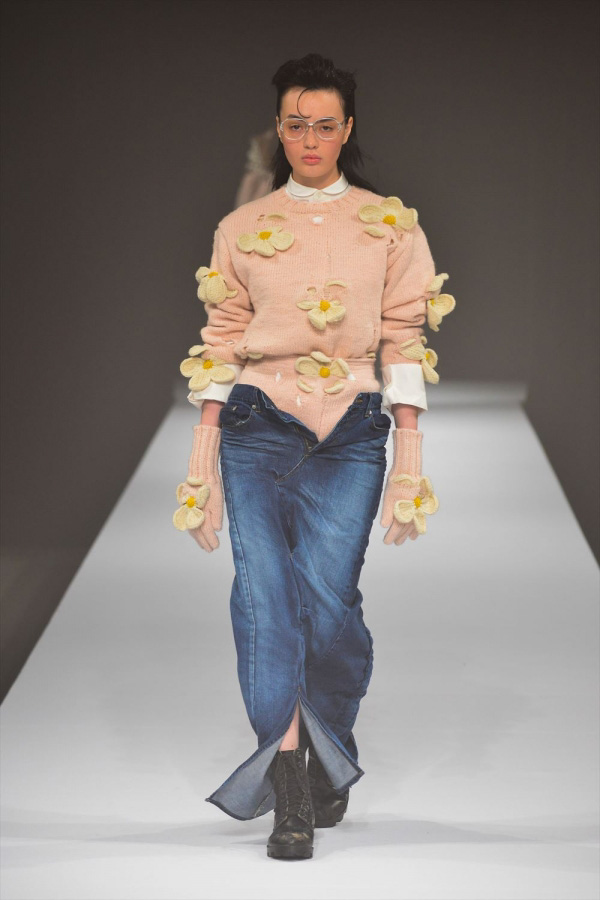 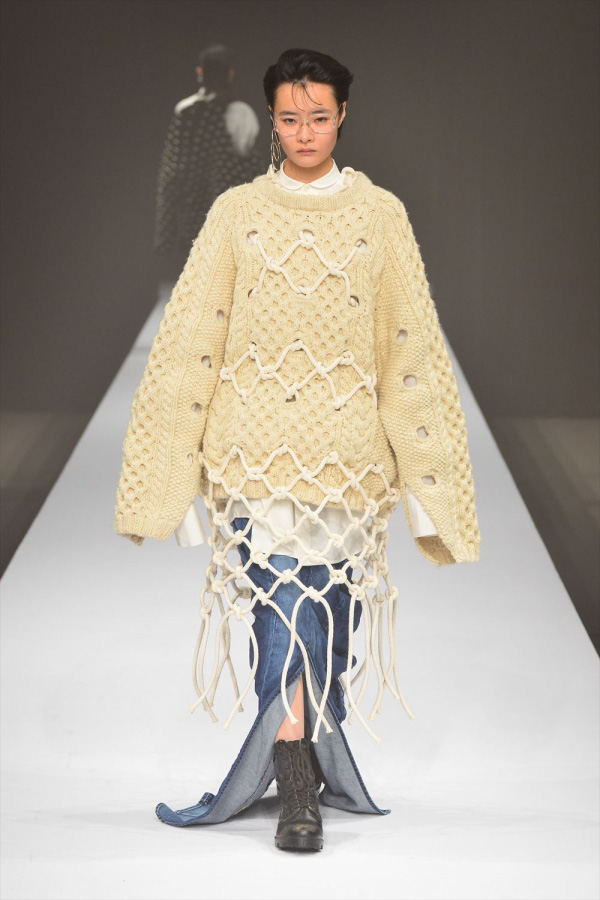 How was the reaction to your runway show?

We received the best reaction ever! When we gave a presentation without guests under the corona pandemic, it seemed to have an impact to the situation, and we received a huge reaction. But this time, we were really surprised because we received great reactions from around the world. We received contact from famous journalists, photographers, designers from overseas. We were extremely happy to find out that our presentation reached such people.

In the 23SS season, you participated in the Paris showroom for the first time. How was that?

This time at Paris, Ron Herman placed an order with us for the first time. If we had been showing at Japan only, we wouldn’t have had a chance for them to see us, so we are happy to have had this opportunity to show at Paris. In overseas orders, we received new orders from Italy, UK, Spain, etc.

You already have accounts in China, but how was your impression of European/American buyers? Any differences?

China is well off and delivery costs are not as high as Europe or the US, so they placed bulk orders from the start, but in Europe, due to high delivery costs and customs duty, it can’t be helped for retail prices become high, and this being a hurdle, they seem to be waiting to see how things go. When we compare with other brands in Europe, we are more expensive than Lemaire or Kenzo, with our price range being in the same position as Jill Sanders.

In your image, how do you intend to differentiate your brand from those brands fighting in the same ring?

I felt this also when we were going around a number of showrooms in Paris with our collection to talk to them, but rather than lowering our prices, I think there is a possibility in extending the direction of offering special pieces, handknit pieces which can only be created by skills and techniques of Japanese craftsmen. Furthermore, in European/US markets in which sexy feminine images are mass produced, we received requests for men’s items.
Another thing which was striking was that every person we talked to at Paris told us, we are a brand that will sell well by presenting a show, so we should most definitely present shows at Paris. 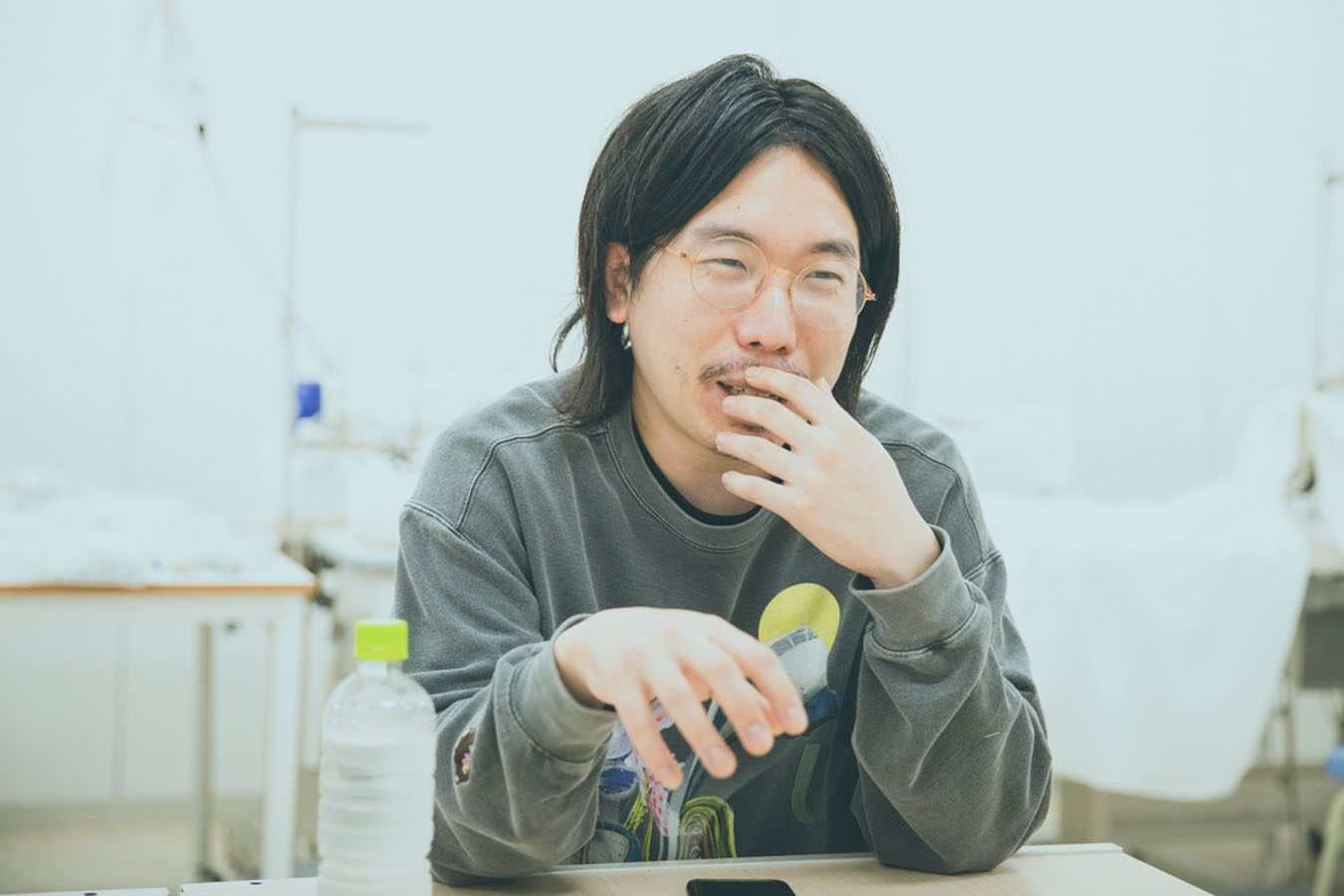 Please tell us what sort of future aspirations you have for the brand.

First off, for the next 23AW season, we are planning to present a runway show at Tokyo, and we intend to continue giving show-style presentations from hereon. Rather than presenting shows because our sales increased, we hope to be a brand which increases sales by doing shows.
Furthermore, this is something I was thinking about since we changed our brand name to pillings, but it is my wish to have pillings remain as a studio, even if I were to leave the brand. Presently, we handle OEM production for 15 other brands as a studio, and it is our wish to leave behind knitting as a vocation, as a skill. We are currently training young generations, and we hope to invigorate the knit industry.

It has been one year since being awarded the TOKYO FASHION AWARD 2022. How has it been?

We applied because we wanted to do a show, and we wanted to exhibit at Paris, but compared to other awards, I think we were congratulated more from the people around us. The year of support has been a truly enormous experience for the brand!

A word of advice to those brands thinking of applying to the TOKYO FASHION AWARD please.

If you are having trouble making up your mind, I think you should just do it and apply. If you are interested in both presenting a show and overseas developments, you should definitely give it a try. I have the feeling, the later you apply, the more you put it off, the more rivals you’ll end up facing!