YOHEI OKI
Yohei Oki, was born in Japan, but he moved to Madrid, when he was 15 years old. Soon after he graduated from the Fine Arts School at Universidad Complutense de Madrid he founded SHOOP At last but no least, Yohei Oki is also a music producer and a DJ, under the name of YYIOY.

MIRIAM SANZ FERNANDEZ
Born in Madrid, Spain.
She studied fashion design at Escuela de Arte N2 Madrid and master class of fashion photography and styling at Isituto Europeo di Design.
She gained experience as a buyer at Ekseption and Marc by Marc Jacobs, a well-established select shop in Madrid.
Miriam lauched SHOOP together with Yohei.

“ SHOOP ” is a unisex brand created by Ms. Miriam Sanz Fernandez, born and raised in Spain, who has compiled experience in the fashion industry, and Mr. Yohei Oki, who has resided in Spain since he was 15 years old, studied art and design there, and is also involved in music activities. Their collection created by a fusion of senses of these two with different nationality and background, is being highly praised, both nationally and internationally. The brand is also known for being supported by many musicians, starting with Drake. Their activities are based in 2 cities, Tokyo and Madrid. We interviewed Mr. Oki of SHOOP, which presented its first runway show in Tokyo this past October, as an award-winning brand of the TOKYO FASHION AWARD .

Please tell us how you came to start up your brand.

SHOOP is a brand Miriam, born and raised in Madrid, launched in 2011. Becoming a fashion designer was her childhood dream, so after studying at a fashion college, she worked in the apparel industry to gain experience. As for me, I moved to Spain when I was 15 years old and studied art and graphic design at an art university. From early on at SHOOP, I had been helping with design aspects, such as graphics, and before I knew it, I had become a member of the brand.

Is there a division of roles between the two of you?

Basically, no. We are inspired by all sorts of things that surround us, from people walking down the street, movies, music, the internet, etc., and contribute ideas jointly in making clothes. At SHOOP, what we place value on is to create things that we ourselves can feel excited about. We are conscious of using never before used details, or to make clothes that have never existed before.

The fusion of senses of 2 people with completely differing nationality and background, seems to also be the identity of the brand, isn’t it?

I think so. But on the other hand, we have always had much in common. For example, we have similar tastes in music. We’ve both grown up listening to hip-hop, and we’ve both been influenced greatly by hip-hop culture, not just music, but in fashion, graffiti, dance, etc.

SHOOP clothes are popular among musicians also. What do you think about the relationship between fashion and music?

I think fashion and music are both important aspect which compose culture. For example, there are designers of a brand emphasizing punk-taste favoring J-POP, and this in itself is an interesting phenomenon, but it feels strange that the mentality behind music and fashion is not linked, so as for us, as ura-Harajuku culture had once been, we hope to create clothes which will one day be a part of creating some kind of cultural movement.

This October, you presented your first runway show in Tokyo. Please tell us about that also.

We’ve done three shows in the past at Madrid, but Tokyo Collection is a sort of gateway to success event for Japanese designers, so being able to participate in it became a huge motivator. We were in Spain when the COVID-19 infection began to spread and experienced a lock-down of approximately 2 months. In the midst of a situation of not being able to leave the house for days and days, and several thousand people dying daily, I thought about “what is the world coming to?”, “why are we making clothes?”, every day. The clothes we make are rather on the luxury side, meaning, it is not necessarily essential for life. But people get excited or moved when they wear clothes they like. Through my days of contemplation, I came to feel strongly that I want to make our brand such that enrichens people’s lives, a brand which creates clothes that does not lead to environmental destruction, as much as possible. The show we presented, turned out to be a place in which we expressed such feelings, expressed those things we have continued to think about over the years. 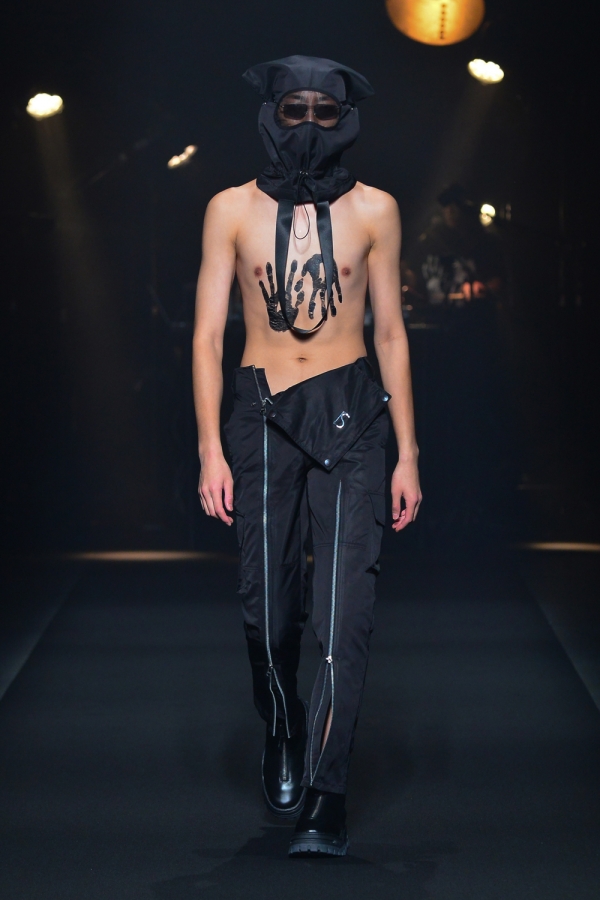 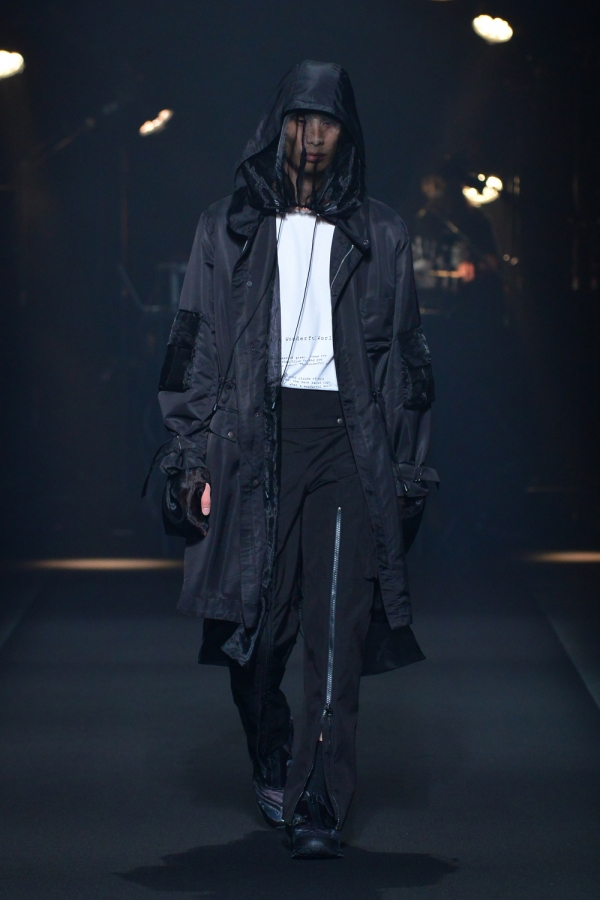 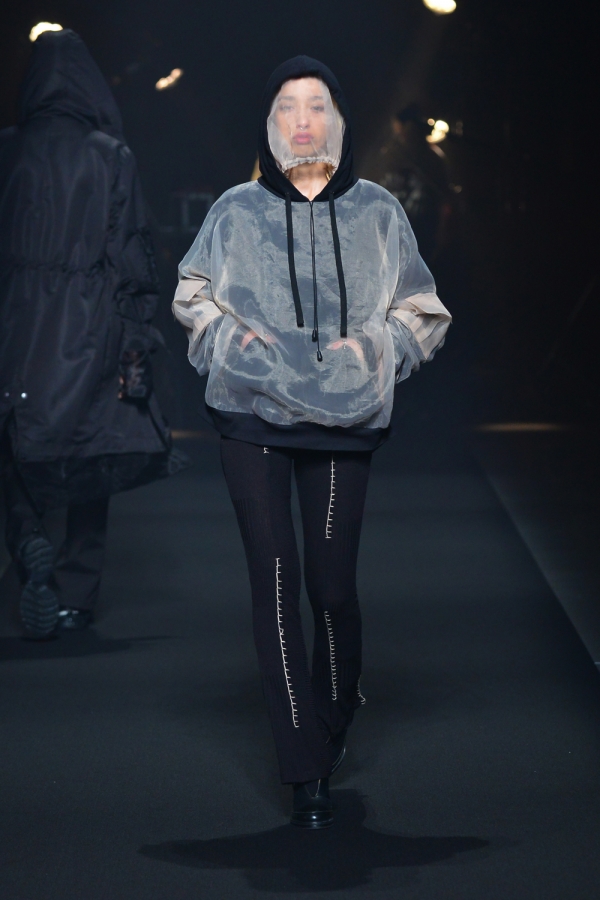 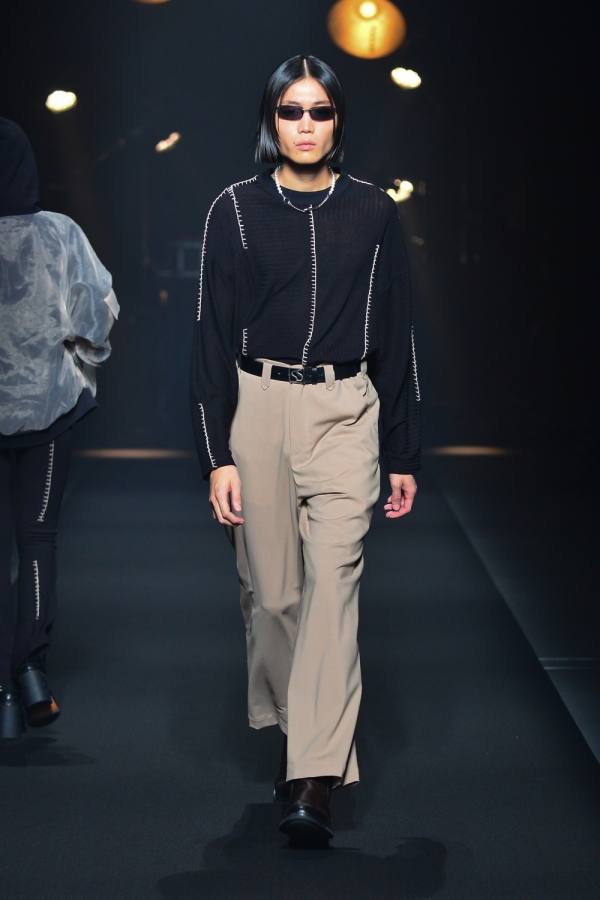 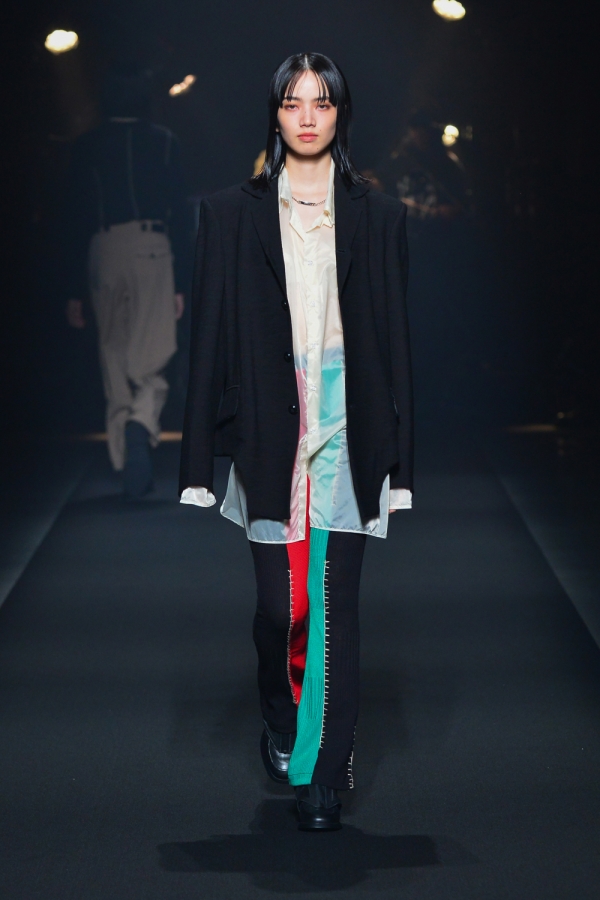 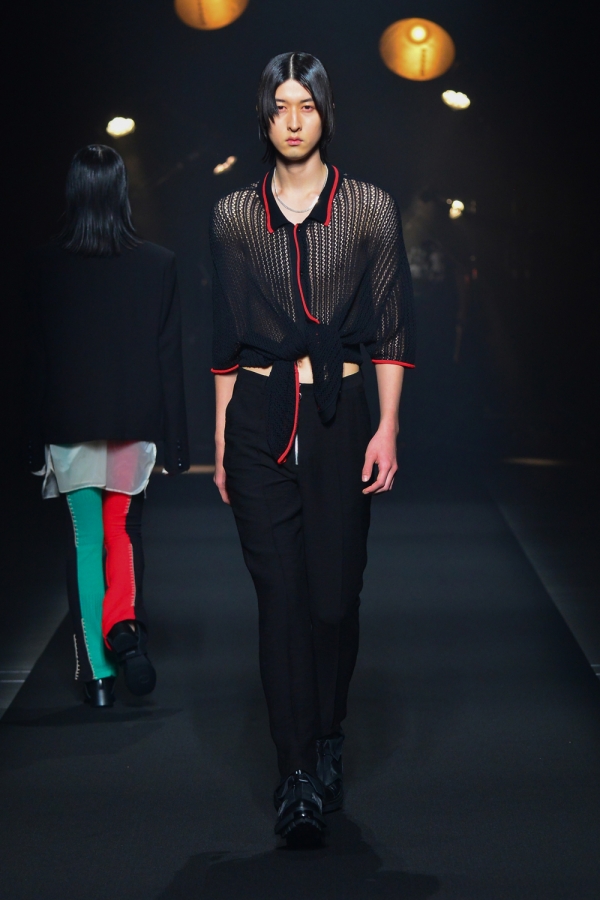 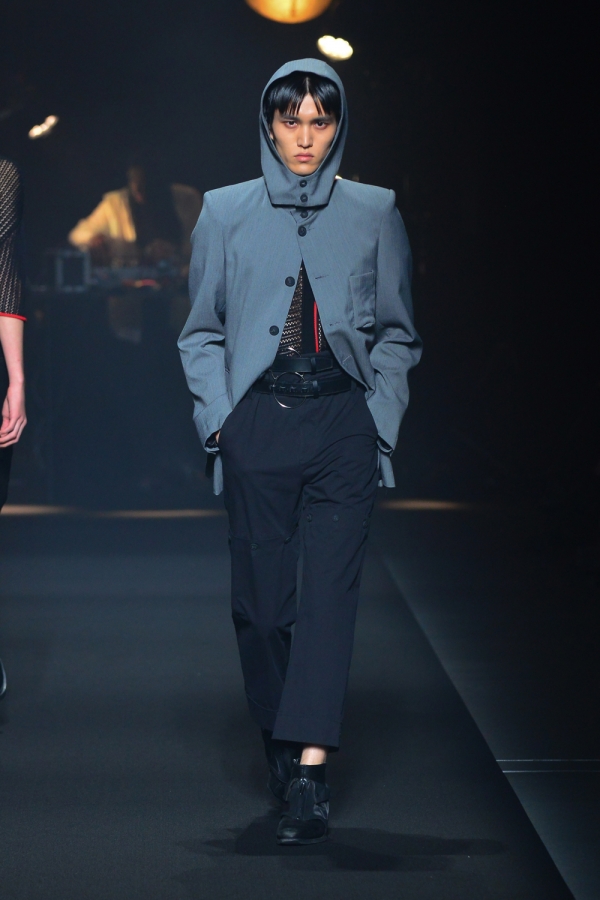 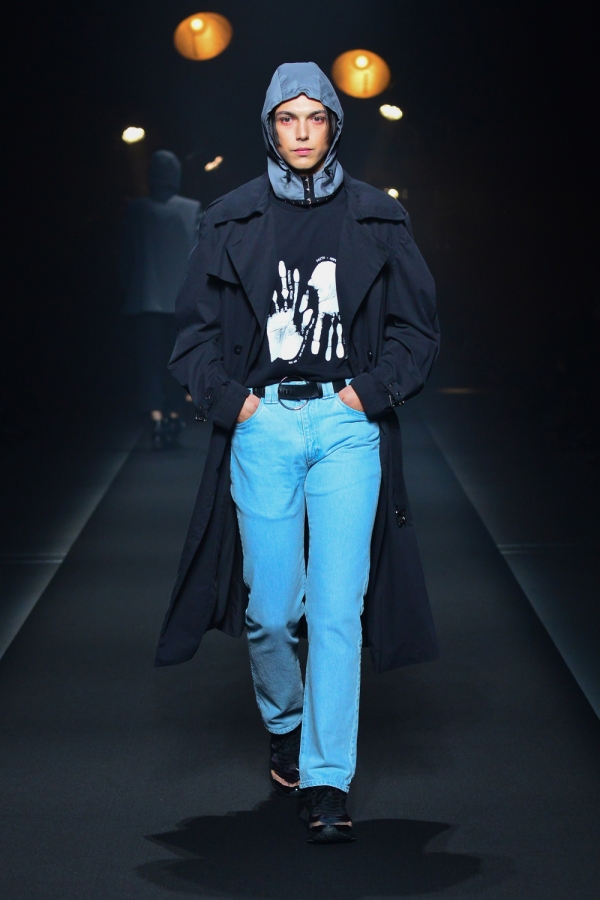 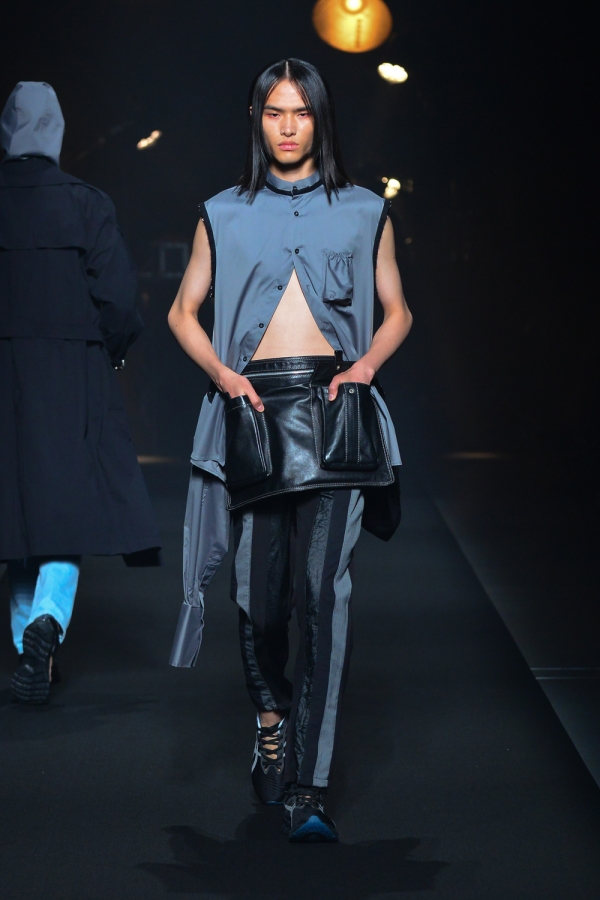 In the show, you also included a capsule collection by Mr. Shinichi Suda, the former designer of FINAL HOME

Yes. I’ve been thinking long and hard about “what is clothes after the pandemic?”, and one of the conclusions I’ve reached is that clothes will literally be a “final home”. I am very honored to have been able to collaborate with Mr. Suda, who has created such a brand.

Have you ever reflected social conditions in your collection theme in the past, as you did this time?

In the season we did our first show in Spain, we established a collection theme on social conditions, such as fake news and post-truth. We created a newspaper office-like set in the venue, but looking back at it now, I think it was a collection true to and expressive of ourselves. We have no intention of conveying political messages through our collection, and our stance is to simply satirize social problems of the time. 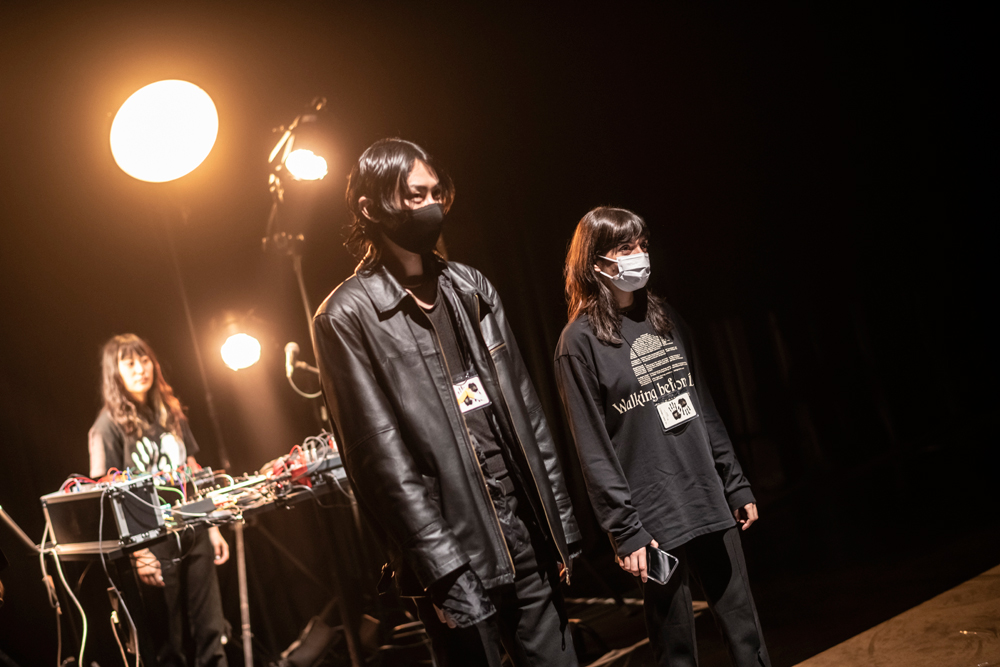 Please tell us also, your future plans for the brand.

I think the brand has grown thanks to all the experiences of this past year, and it has been an opportunity to contemplate the essence of various things. Originally, SHOOP had begun to attract attention by uploading look book photos on SNS, so we’ve always felt that no matter where we are, as long as we transmit interesting things, many people will see. However, at the same time, in the world of fashion, connections with people in real situations is extremely important. Furthermore, we’ve received much greater reactions to our Tokyo show than we had imagined, which has made us renew our thoughts on the power of physical, in the midst of situations such as the present. When I think about the future with such experiences in mind, I feel Tokyo is an extremely important base in order for us to grow. I would like to examine the possibility of continuing to present runway shows in Tokyo, and I hope that one day, we could become a brand representing Japan, and with the reactions gained, spreading out to the world from Tokyo.