Tokyo based designer Chisung IHN is born in Korea, Seoul. After graduating from Faculty of Business Administration in University, he moved to Tokyo in 2008. He studied at Bunka Fashion College and Bunka Fashion Graduate University, graduating in 2013. He shows his works in London, Russia, Seoul, and Tokyo. He launched his label "IHNN" in 2015.

“Want to work in fashion in Japan”. Mr. Chisung Ihn promised himself when he was twenty years old, while on-leave from university for military service, and in 2015, started up his own brand “IHNN”. Being particular about developing as a Japanese brand, last year while welcoming the 5th anniversary of the brand’s debut, was chosen as an award-winner of the TOKOYO FASHION AWARD 2020 (indicated as TFA hereinafter) , and is showing desires towards serious overseas developments. Now tackling next steps as a brand, we spoke to the designer, Mr. Ihn, on the background behind how the brand got started, his particularities in clothes making, future plans, etc.

You are a Korean, but what prompted you to become a fashion designer in Japan?

All Korean men who have come to age have the duty to belong to the military for a certain term, but most people join the military as a university student. I was a student studying in a faculty of business, but I took 2 years leave of absence to fulfill my military duty. Because they go through strict training at a sensitive age, the mentality of young Korean boys become mature. In the military, we spend many nights standing, during which time we are not allowed to move, so the only thing we can do is think (laugh). There’s plenty of time to think about the future, and I realized, the thing I like most is fashion, and because I was strongly influenced by Japanese street fashion, I decided I wanted to work in fashion in Japan. 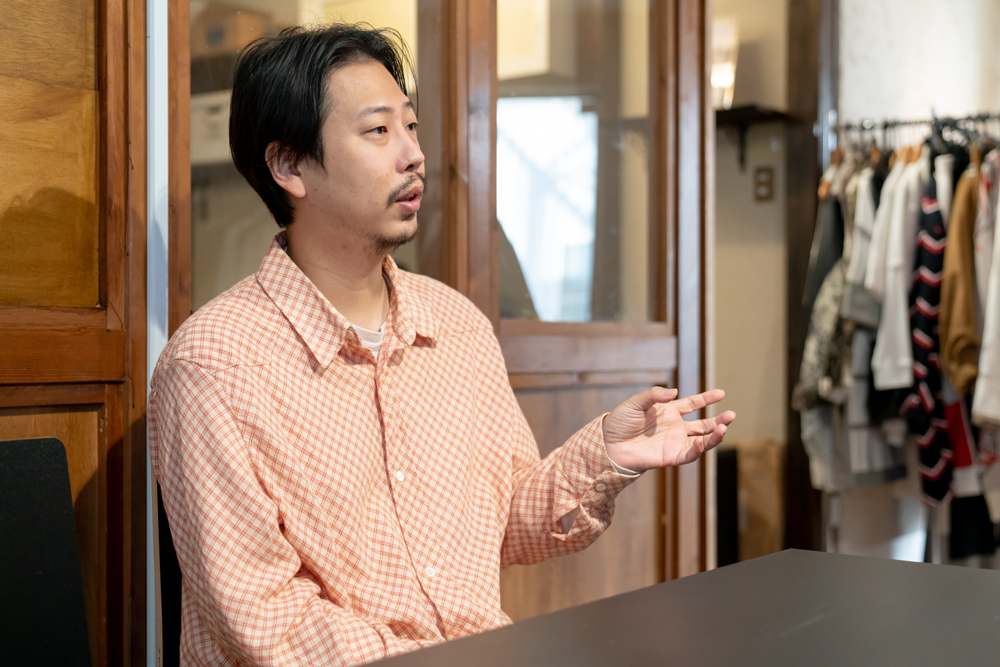 So that’s why after graduating a university in Korea, you came to Japan and entered Bunka Fashion College.

Yes. I studied the basics at Bunka Fashion College and went on to Bunka Fashion Graduate University to study fashion design seriously. When graduating, I was given the opportunity to do a show at London. There is a thing called “GRADUATE FASHION WEEK”, in which fashion schools in England get together to present graduation collections. As a part of this, there is an event called “International Catwalk Show”, in which graduation collections of overseas fashion schools are presented, and I was selected as a representative of Japanese students. After the show I received grave reactions, such as being introduced by ‘VOGUE’ and ‘ELLE’, along with receiving contact from a famous artist regarding making costumes, and this gave me the push to launch my own brand.

Being active as a fashion designer in Japan. How is that?

One of the most important reasons to be active in Japan is that it allows me to make original fabrics from the thread stage. In Korea, there is an extremely large textile market called Dongdaemun, and because Korea is sensitive to trends, they carry a wide variety of colors and patterns, but making original textiles is difficult due to minimal lots being extremely large, and realistically impossible. A factory in Bishu has been supporting me for many seasons in producing original textiles, but they answered my order even right after my debut when we could only place orders for small lots. In Japan, there are textile production centers all over Japan, each with original characteristics, and through careful communication, I am able to make the fabric I wish for. To exert the creation I wish, Japan is an extremely attractive place. 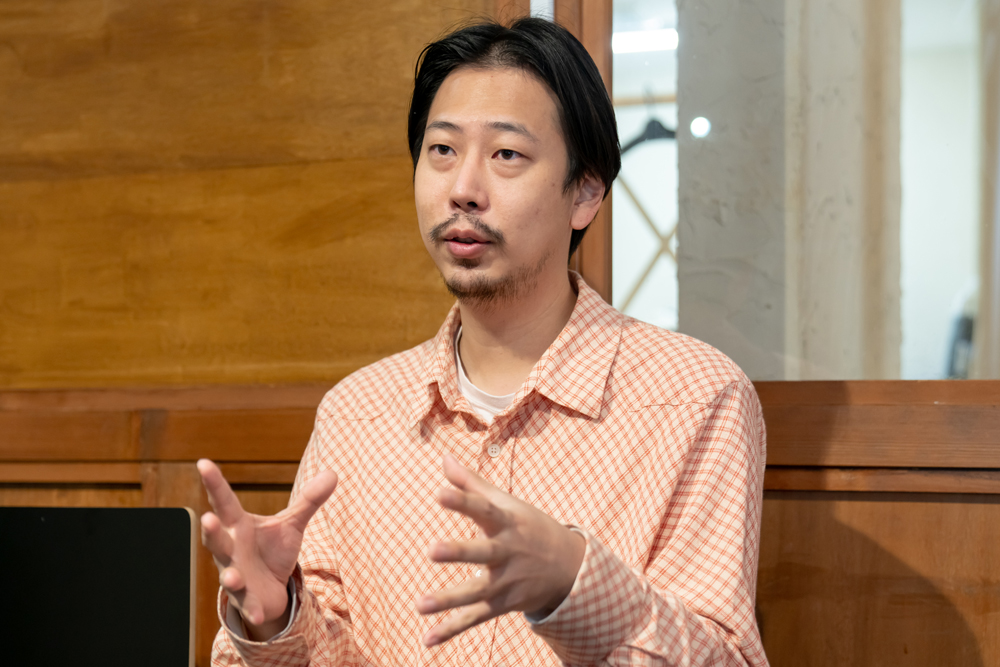 What process do undergo in making clothes?

I get my ideas from things that are close by, such as books or memories of travel, and usually start building concept for clothes making from wordings derived from there. For example, the theme for my 2020 A/W collection was “Sanctuary（聖域）”, but the Chinese character “聖 (holy)” is part of my name “致聖 (Chisung)”. My father named me with the hope that I would “become a person with high virtues, like a ‘holy person’”. This is a rare name, even in Korea, and actually, my last name “印 (Ihn)” is rare, too. That’s why I named my brand “Ihn”, but I add a “N” meaning “and” to “IHN”, which is how my name is spelled in English, to make it mean “me and”, with the wish that many people, things will connect through and with me. I chose the theme “Sanctuary” because I wanted to show the essence of IHNN creation, including my roots. 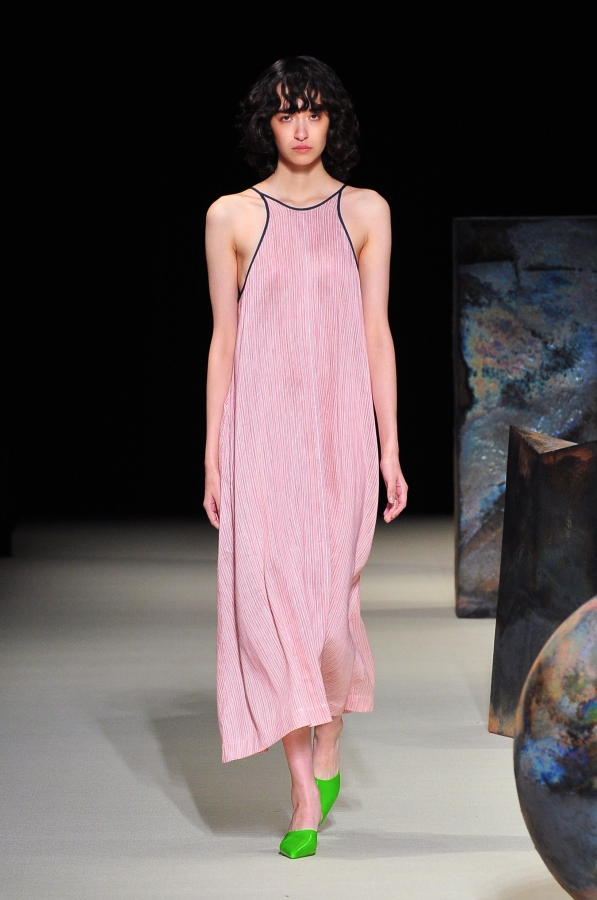 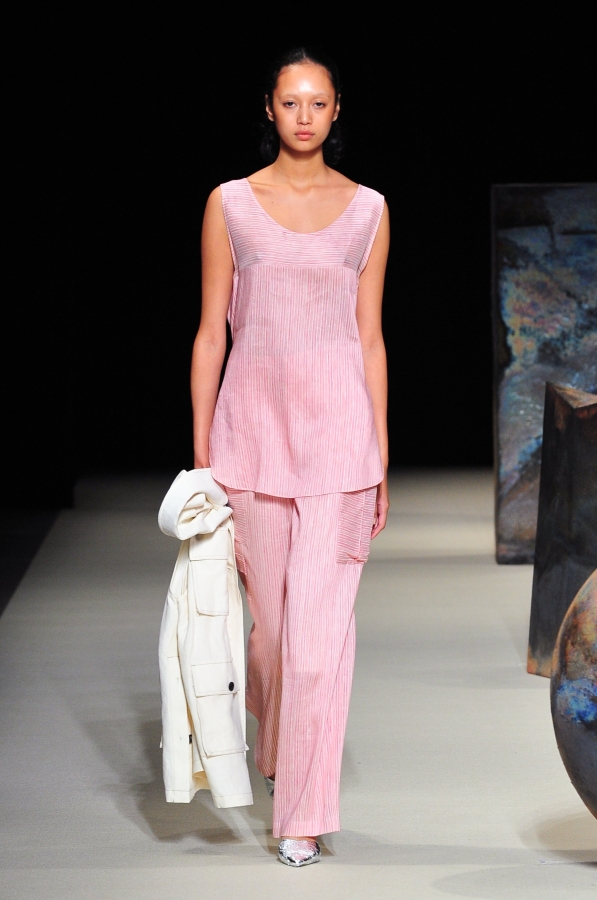 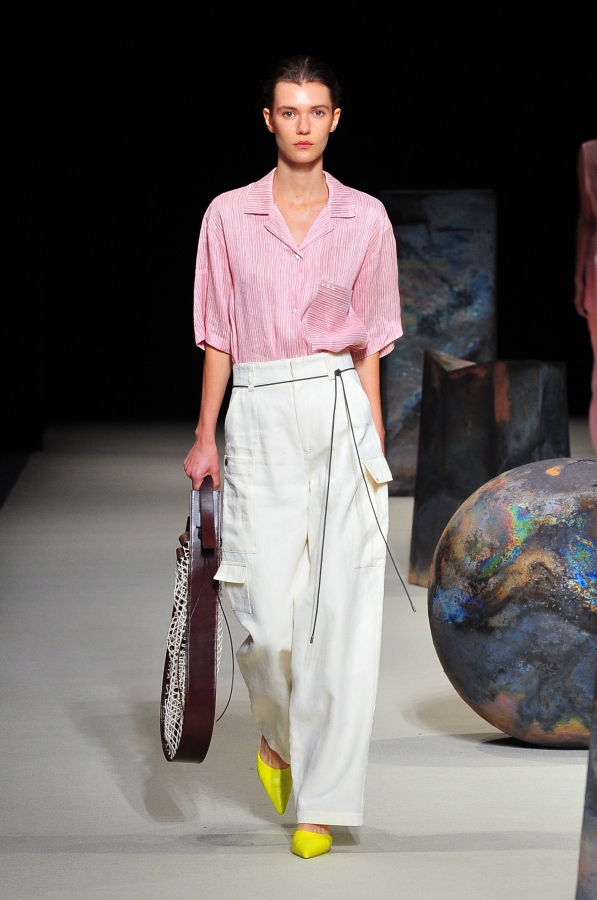 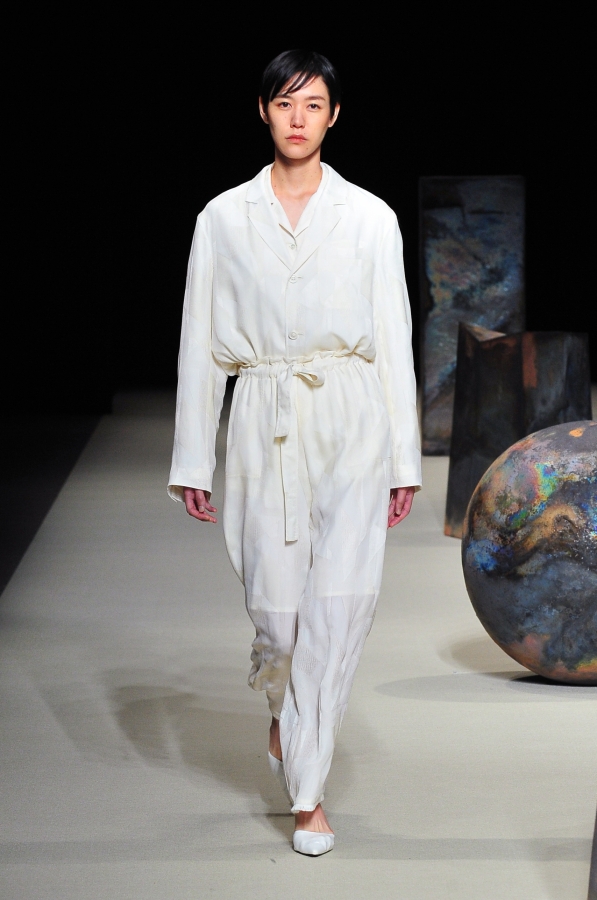 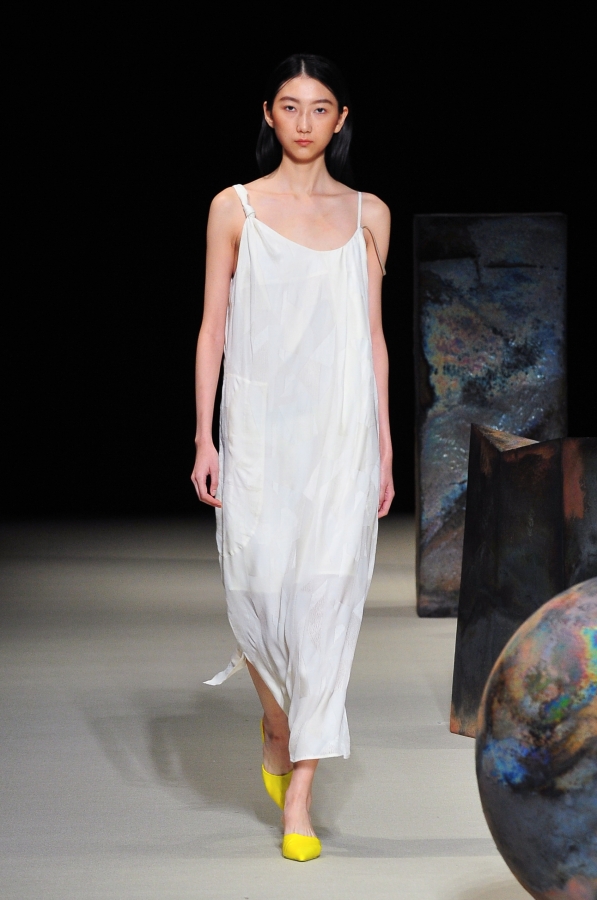 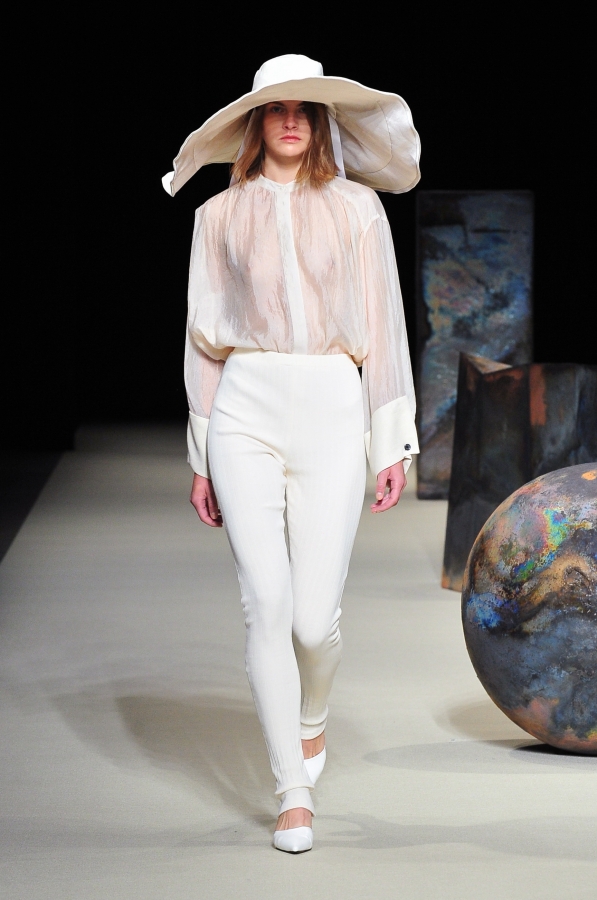 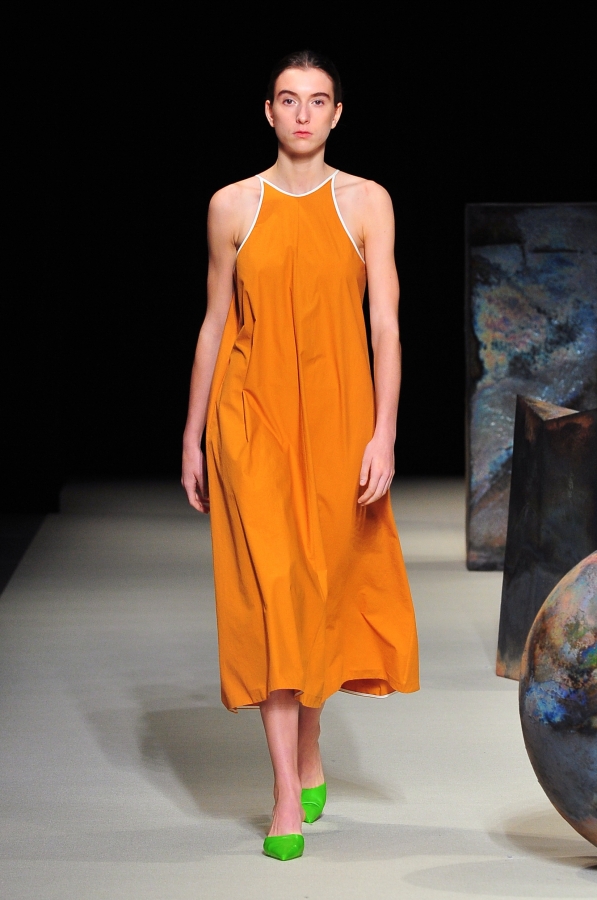 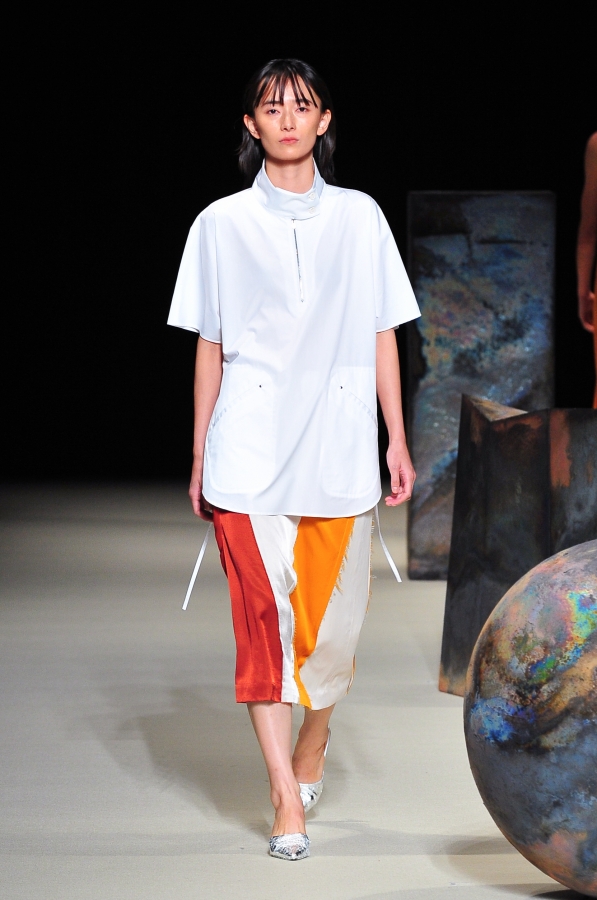 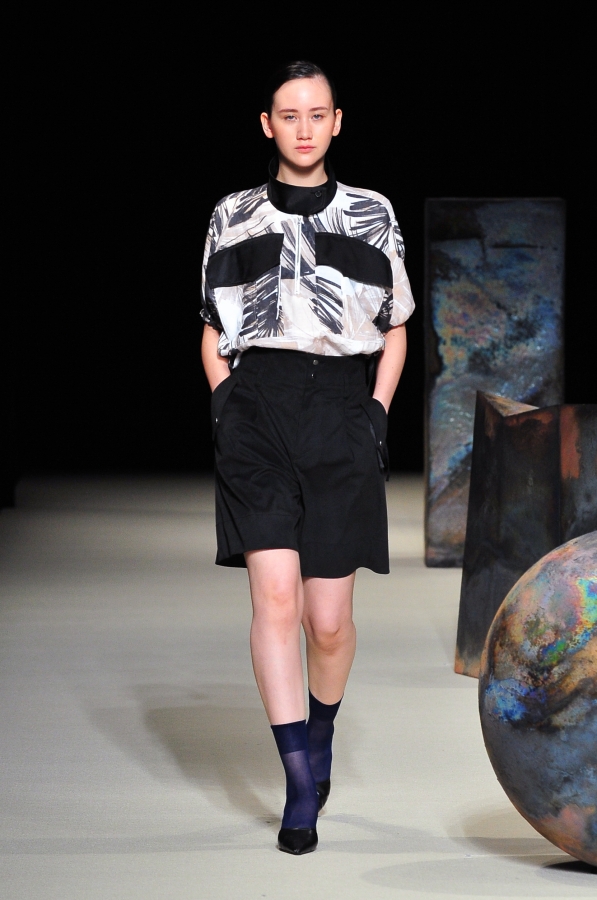 This past October, in Rakuten Fashion Week TOKYO 2021 S/S, you held your 2nd show as IHNN, as a triumphant return show of TFA. How was that?

It was the first show in2 years, so I wanted to express the sort of “color” of IHNN which we had built up in our 5 years of activities since launch. In the show, we collaborated with the works of Mr. Tomonari Hashimoto, a Shigaraki ware artist who was a finalist of “Loewe Craft Prize 2019”. I sympathize with the way Mr. Hashimoto creates his pieces, taking a long time in creating just one piece as if nurturing a living thing, and I was infatuated by the beautiful colors of is Shigaraki ware, which can only be created by the time and effort he puts into his work, so I offered the collaboration. Originally, the collaboration was supposed to be for my 2020 A/W collection, so I had been imagining the collaboration under the “Sanctuary” theme, but because it was cancelled due to the COVID-19 pandemic, I rethought the collaboration under the 2021 S/S theme, “The boundary between Daily and out of Daily”. Because of being in the midst of the COVID-19 pandemic, we are living in a state of daily life being extraordinary, which made me rethink the existence of clothing in daily life, so I composed our 2021 S/S collection with real clothes. On the runway, to produce a bit tense mood in which real clothes share and coexist with extraordinary, unusual, but fabulous things, I placed Mr. Hashimoto’s works symbolically. Mr. Hashimoto is an extremely pure artists, but his works are extremely powerful, as you can see. Especially, his colors have a beauty which cannot be expressed in words. The contents had changed from my original ideas, but I am genuinely happy that the collaboration came true.

Finally, please tell us your plans for the brand’s future.

First, making good use of being a TFA award-winner, I hope to raise the brand’s level of acknowledgement, increase the number of accounts both domestically and internationally, thereby enlarge our business scale. Furthermore, thanks to the people of Japanese production centers, the quality of our clothes is improving, so I intend to continue making clothes which IHNN fans can enjoy for years to come. As I mentioned earlier, Korea is sensitive to trends, but does not have a culture of creating originals from scratch, so I hope, some day, my activities in Japan will have a positive influence on Korean designers. 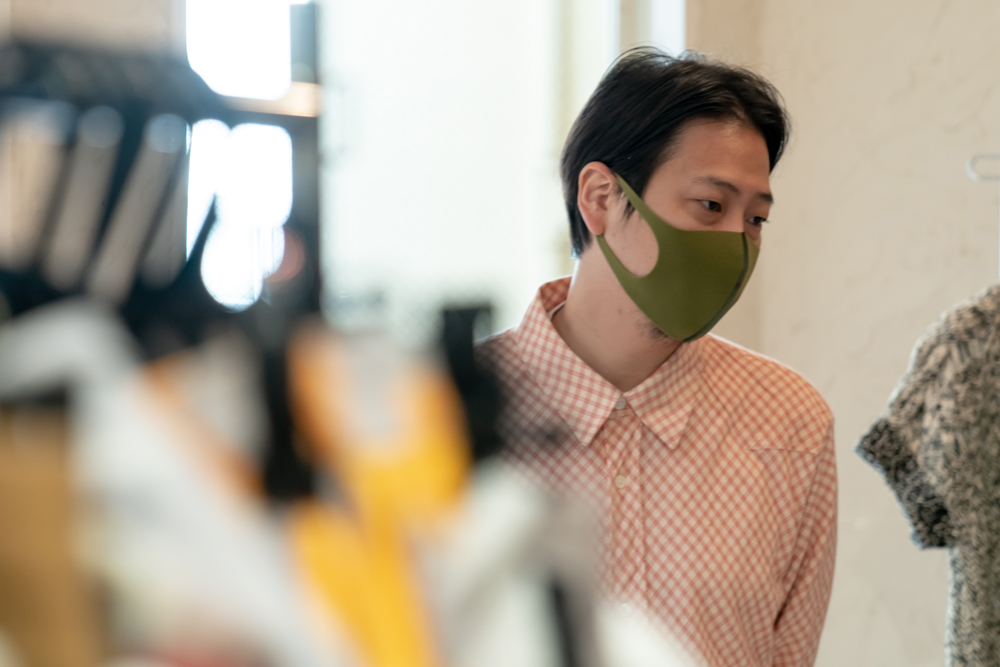