KOZABURO
Born and raised in Tokyo, Kozaburo Akasaka initially studied philosophy at Toyo University in Japan until deciding in his final year to pursue a career in the fashion industry. He entered CentralSaint Martins College of Art where he attained his undergraduate degree in Fashion Design Menswear. In the years following St. Martins he worked for a number of designers, most notable of them being Thom Browne. After the having professional experiences, he enrolled in Parsons School of Design to pursue his MFA Degree. In his first year of the program he won the Spring/Summer 2016 VFiles Runway, and, upon completion of his degree, his final thesis collection was stocked at Dover Street Market. In 2017 he took home the LVMH Special Prize.

LANDLORD NEW YORK
A native of Tottori, Japan, Kawanishi graduated from Central Saint Martins and Parsons School of Design, where he obtained an MFA in Fashion Design and Society at Parsons.
Kawanishi’s works have been exhibited widely, including Somerset House in London (2012); Mode Biennale in Holland (2013); Artipelag in Sweden (2015); Biennale International Design Saint Etienne in France (2015), and Trapholt in Denmark (2015).
He was also shortlisted at the International Emerging Fashion Talent Showcase 2012, and named first scholar for Uniqlo-Tomodachi scholarship.
And then he launched LANDLORD in 2015.

By invitation from JFW, KOZABURO and LANDLORD NEW YORK, 2 brands based in N.Y., held a joint show at Rakuten Fashion Week TOKYO 2020 S/S. Mr. Kozaburo Akasaka and Mr. Ryohei Kawanishi, have a very similar personal history of having studied fashion at Central Saint Martins in London and Parsons in N.Y. at almost the same time, and starting up their own brand at N.Y. We spoke to the two on their road up to now, and on the behind the scenes of their joint show. 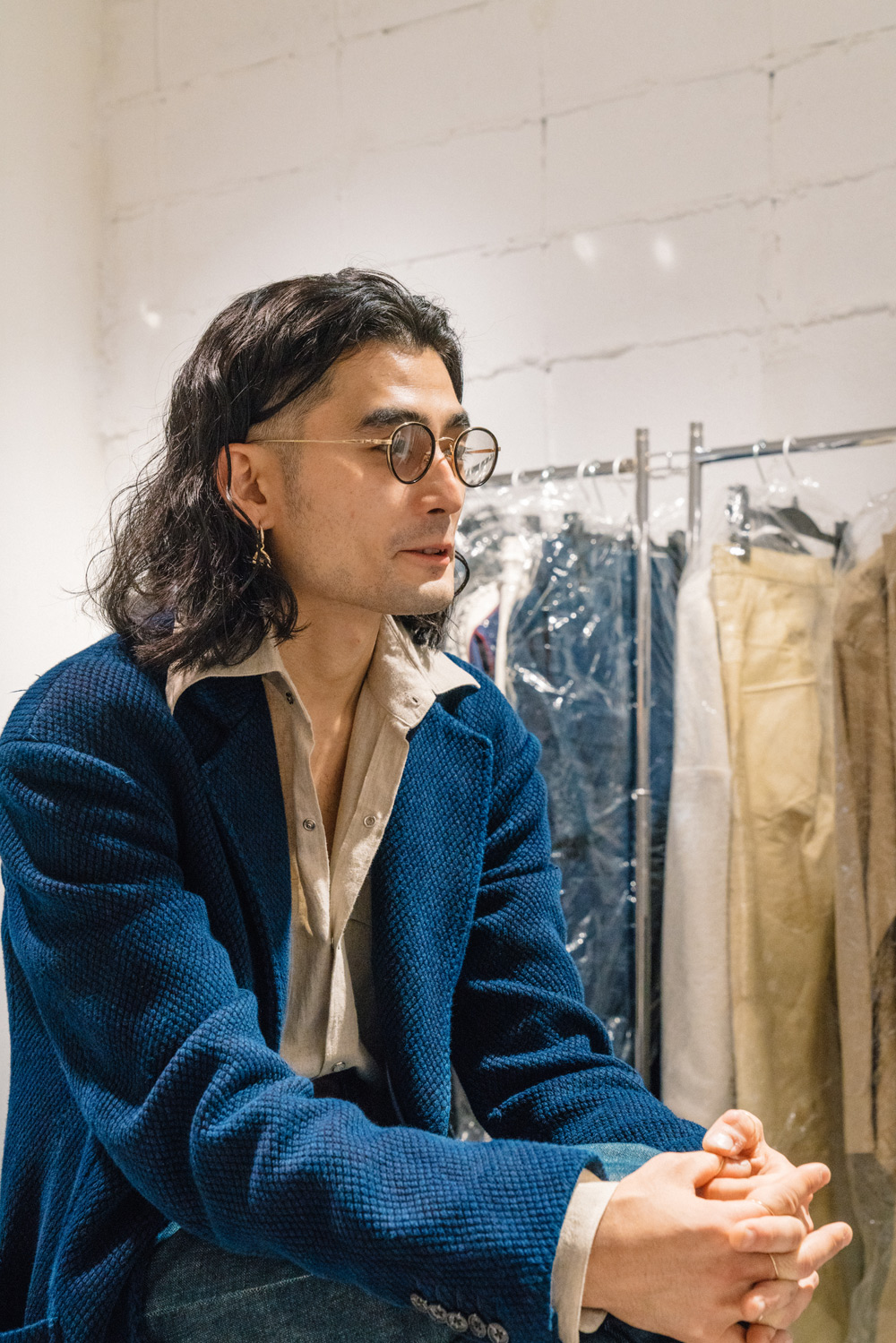 Around when did the two of you begin to aspire to become a fashion designer?

AKASAKA: Originally, I was interested in music and played in a band, but I realized I didn’t have talent in music, so I began to search for possibilities of expression in fashion, which is closely related to music. At university, I majored in philosophy, but dropped out to study fashion, and went to Central Saint Martins.

KAWANISHI: I was interested in fashion since around junior high school, but thought I wanted to go into the world of art in the future. But unfortunately, I failed all the Art University entrance exams, and figured, rather than studying another year to get in … I tried for Central Saint Martins, got accepted, and ended up studying at England. 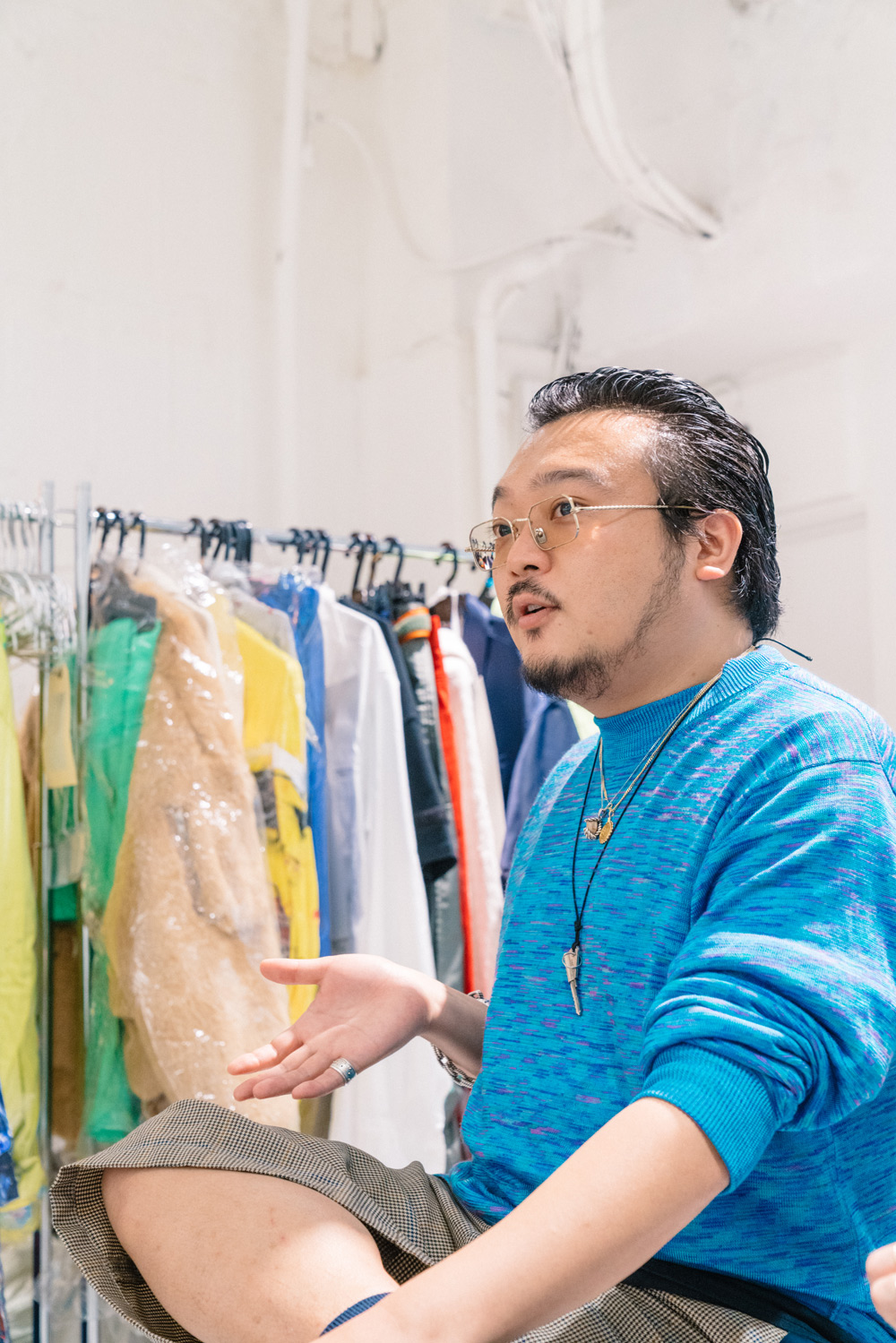 Both of you went on to study at Parsons Graduate School after studying at Central Saint Martins. Did you know each other from back then?

AKASAKA: Yes. I entered Central Saint Martins a year earlier than him, but one year before my final year, I took advantage of a system called gap year, which allows students to take a year off, and went to intern at Tom Brown in N.Y., so we graduated in the same year. After that, I worked at Tom Brown for 2 years, and went on to Parsons Graduate School, at which, I ended up with Ryohei again.

KAWANISHI: We knew of each other since Central Saint Martins, but wasn’t especially close or anything. I didn’t use the gap year, so we graduated in the same year, but back then, he was dressed from head to toe in Tom Brown, and I thought of him as some stuck-up guy (laugh). Plus, he used to skateboard in those clothes, so I used to think, what kind of attitude is that? (laugh). 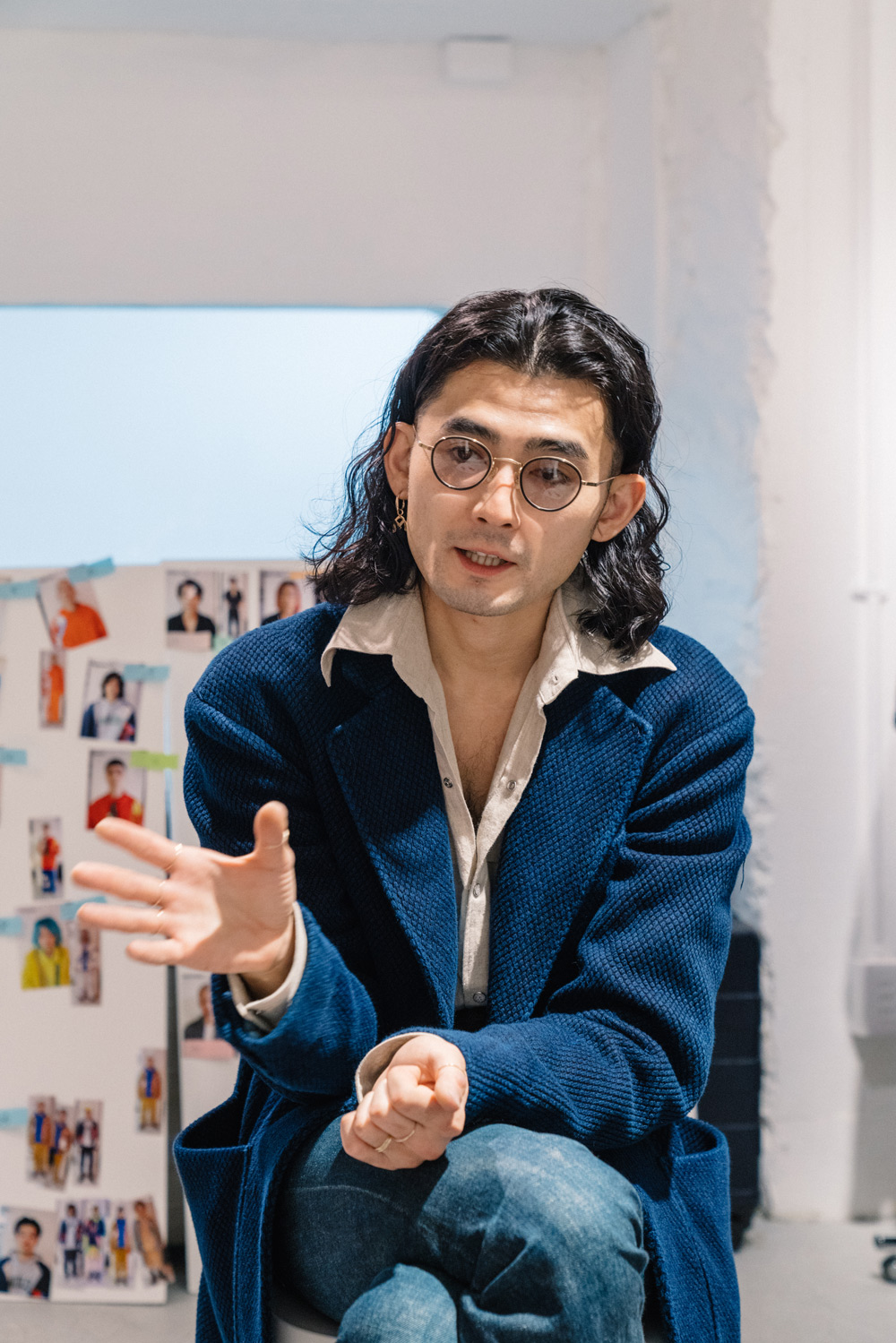 Please tell us how you each came to start up your own brand.

AKASAKA: From when I was a student at Parsons, I had some shops carry the clothes I made, but after graduating, I wanting some time off, so I worked at a vintage store for a while. After a while, my creative urge began to swell, and I decided to start-up my own brand.

KAWANISHI: I had always thought of fashion as a self-expression, so I didn’t really have the idea of starting up my own brand and selling clothes. But in my last year as a student, my child was born, and just at a time when I had to seriously consider working, the president of the factory who is presently my business partner, came to me with an offer, so decided to start-up the brand. 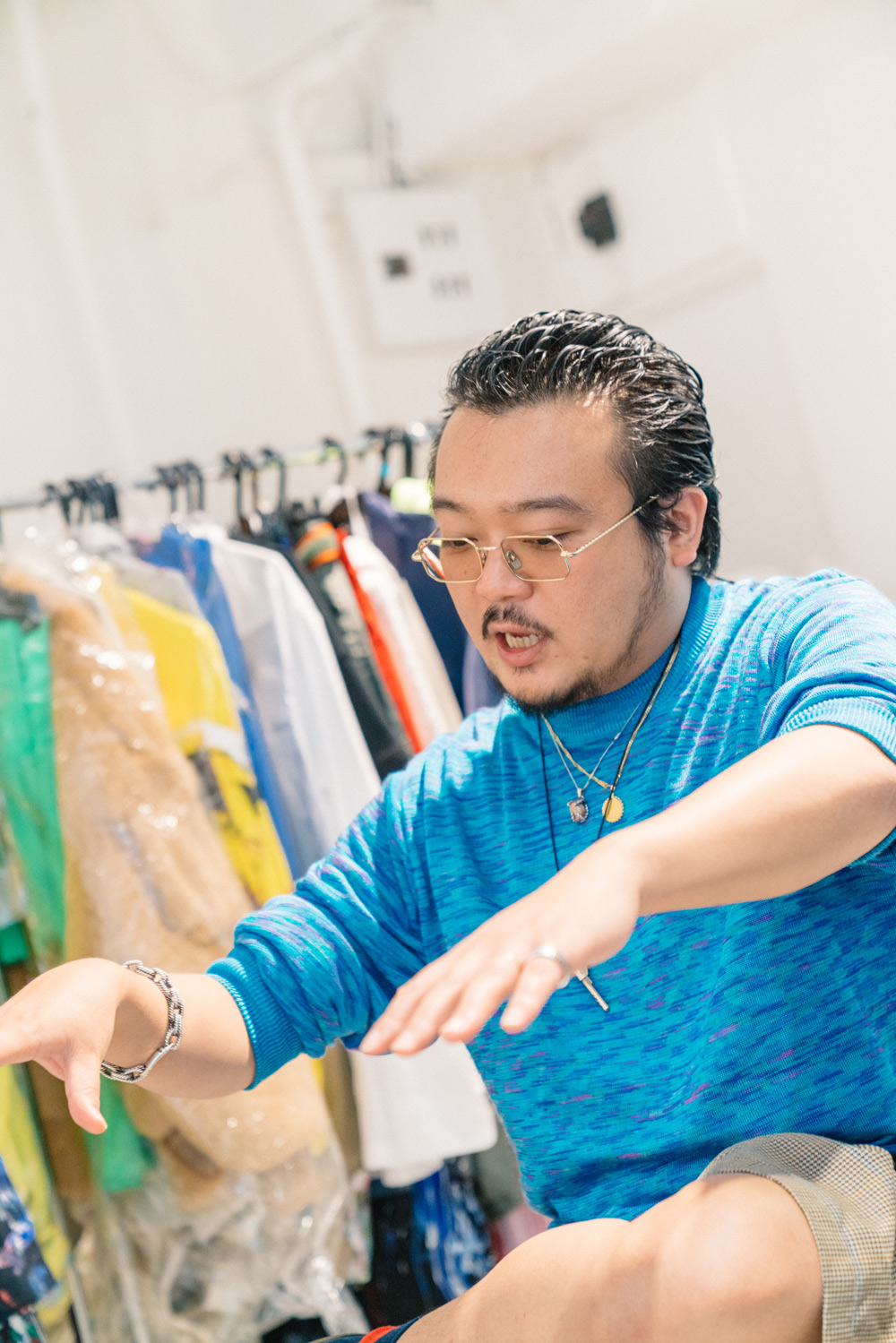 Was it a natural flow of things to choose N.Y. as the base of your activities?

KAWANISHI: I’ve never had any special longing for the U.S. or N.Y. (laugh), so my starting my brand at N.Y. was simply a matter of the person supporting me being there. But having actually started the brand in N.Y., the atmosphere is good. For example, in Europe, there exists a hierarchy based on race and/or social status in the background, and there exists an aspect that many things are judged based on that, but the U.S. has a simplicity that, as long as something is interesting or able to earn money, it’s OK.

AKASAKA: For me it was the opposite. I liked the U.S. I had a strong interest towards jeans and workwear, and I was attracted to the fact that all sorts of things were happening despite their short history as a country. Also, because my wife was from a different foreign country, we felt we wanted to live at some country we liked, at which we would both be in a neutral status as a foreigner. 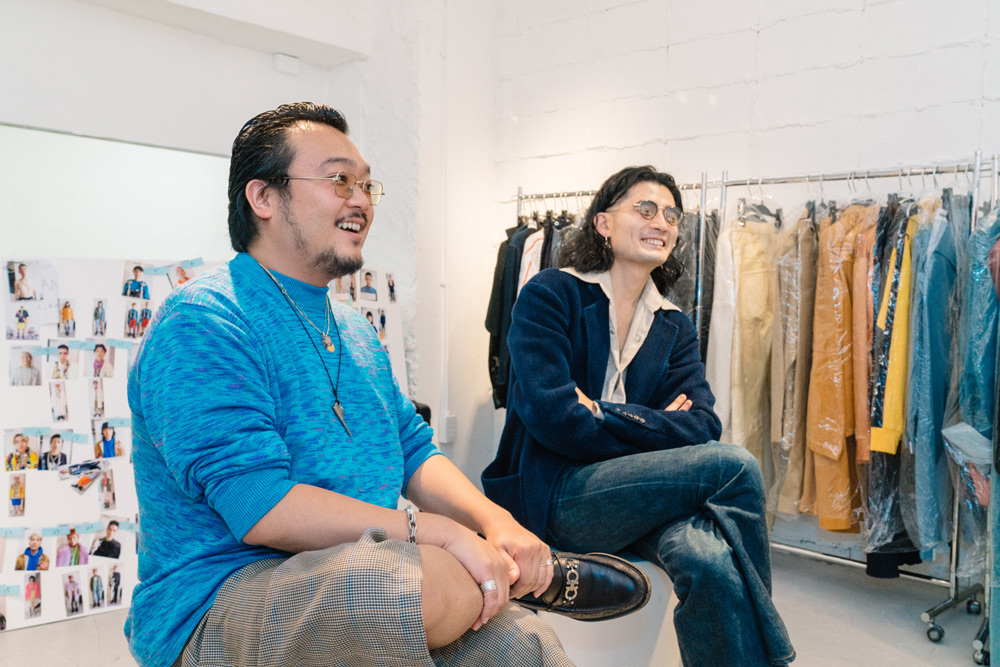 KAWANISHI: The people of N.Y. are not too concerned of small details such as the background of the brand, and rather, tend to praise the creation instinctively. LANDLORD has an aspect of expressing a N.Y.-ish-ness, of accepting everything like a sponge, plus a casualness, in a positive sense.

AKASAKA: I’m not clever like Ryohei, so I can only create individualistic clothes based on things I’ve seen or my mood at the time, but now-a-days, I make it a point to travel around the various states of the U.S. and reflect the inspirations I gained there in my collections. 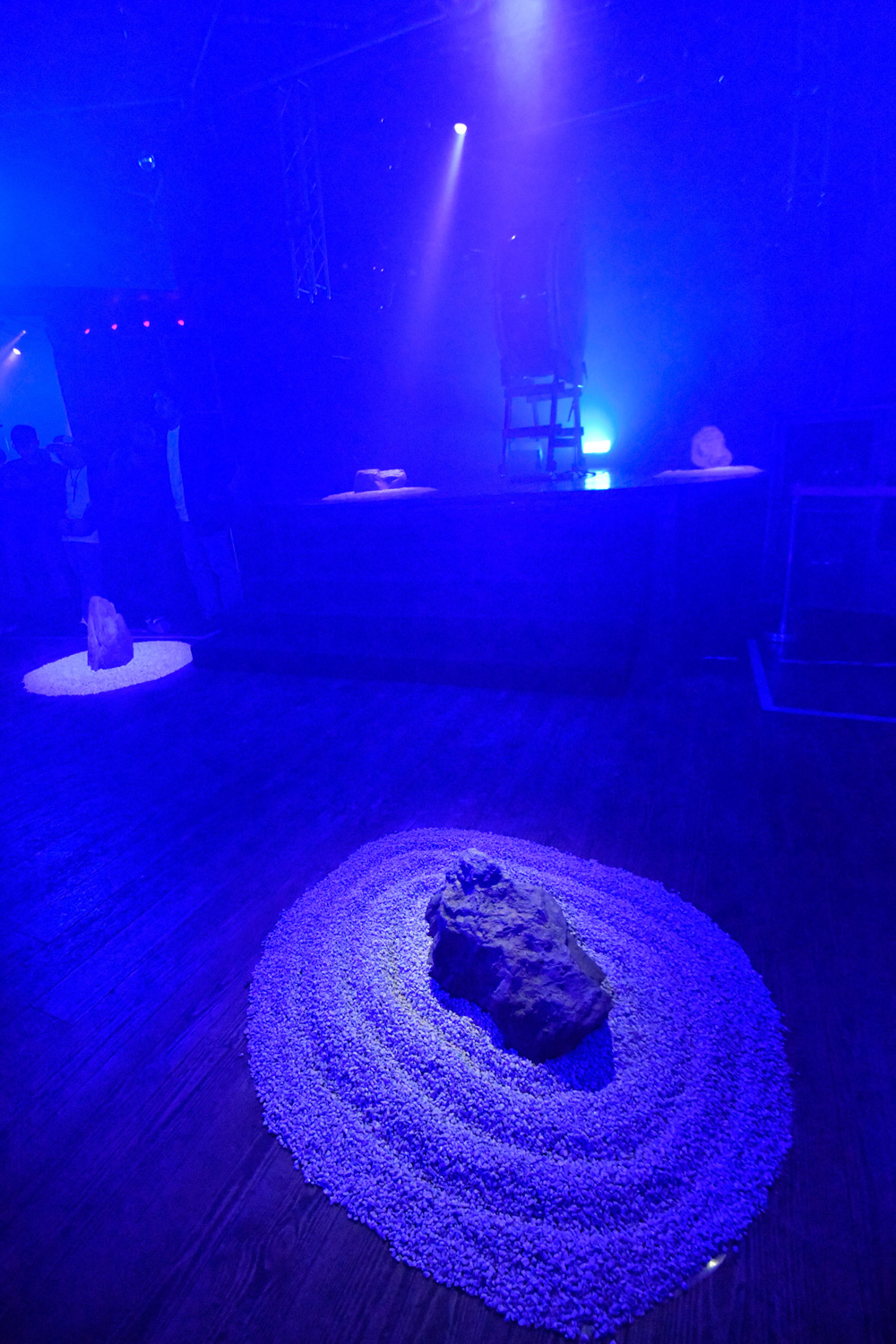 It can be said that the two of you are complete opposites, so how did you come to holding a joint show at Tokyo this time?

KAWANISHI: At first, the invitation was for separate shows. But because the schedule was so tight, and because it was difficult to bring the whole team who handled the N.Y. show due to budget reasons, in order to secure show quality, it seemed better to do a joint show. I wanted to help enliven the fashion week in Tokyo, so I was willing to do what I can, but facing it, it was much more difficult than I had imagined it would be (laugh).

AKASAKA: I felt insecure about all sorts of things too, but I thought I’d never have a chance to hold a show in Tokyo if it weren’t for such an opportunity. Furthermore, although the number of people interested in my brand are gradually increasing, because my collection can only be partially seen at shops, I felt this was a good timing to present the whole picture of the brand. Also, I thought it was significant to have my family, factory and/or suppliers see us by doing a show at Tokyo. 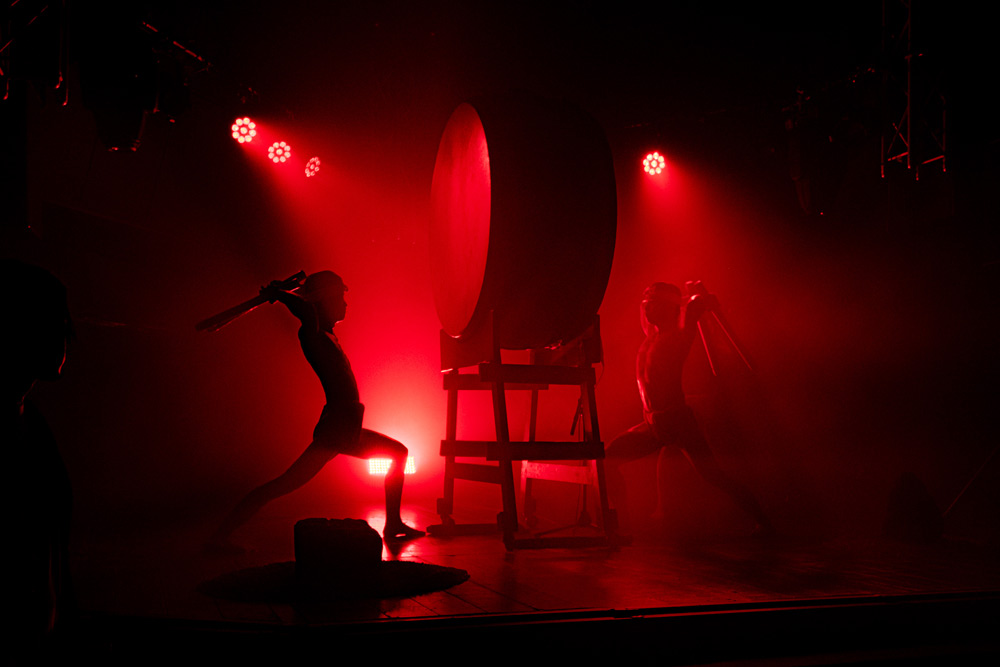 What did you think about two brands with opposite characteristics doing a joint show?

KAWANISHI: We searched for a theme which symbolized our situation of Japanese based and active in N.Y. And through that, we ended up building the production pivoting around the movie, “Koki-no Sakura”, expressing the ideology of a Japanese strongly influenced by the culture and economy of post-war America.

AKASAKA: Conscious of the fact that the clothes of the brands and its designers with opposite personalities will be mixing together at Tokyo, as a whole, we took the shape of expressing the spirituality and/or culture of Tokyo, while LANDLORD expressed its “motion, activeness” and KOZABURO expressed its “still, quietness”. 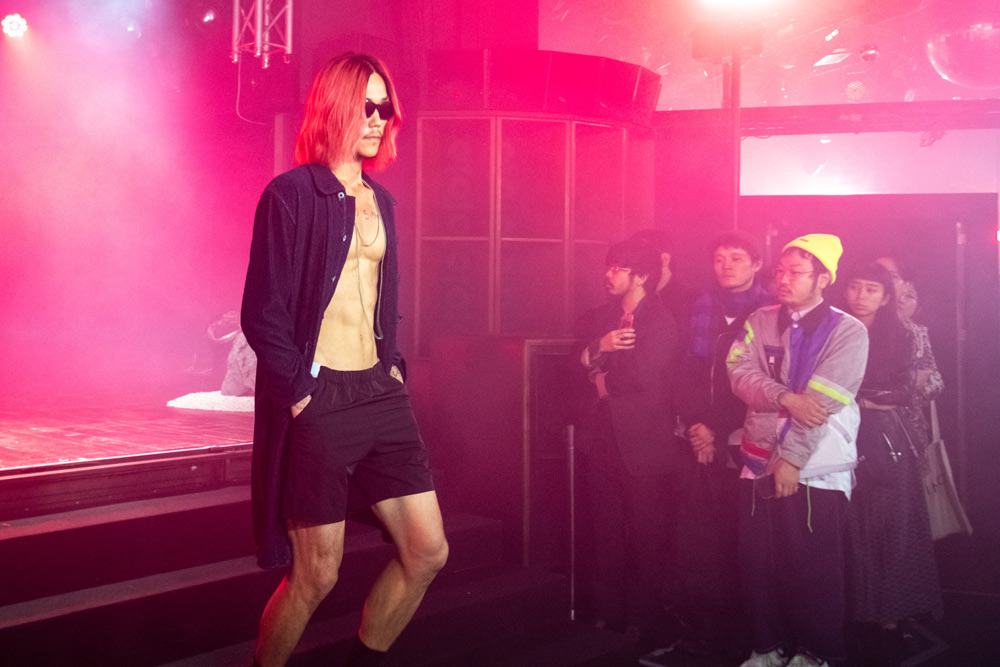 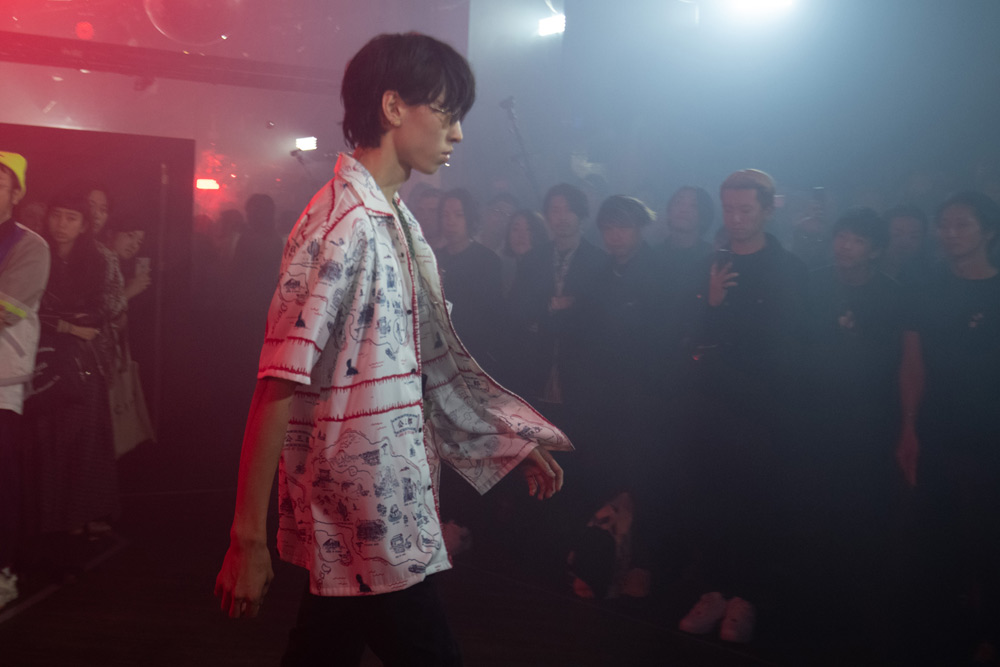 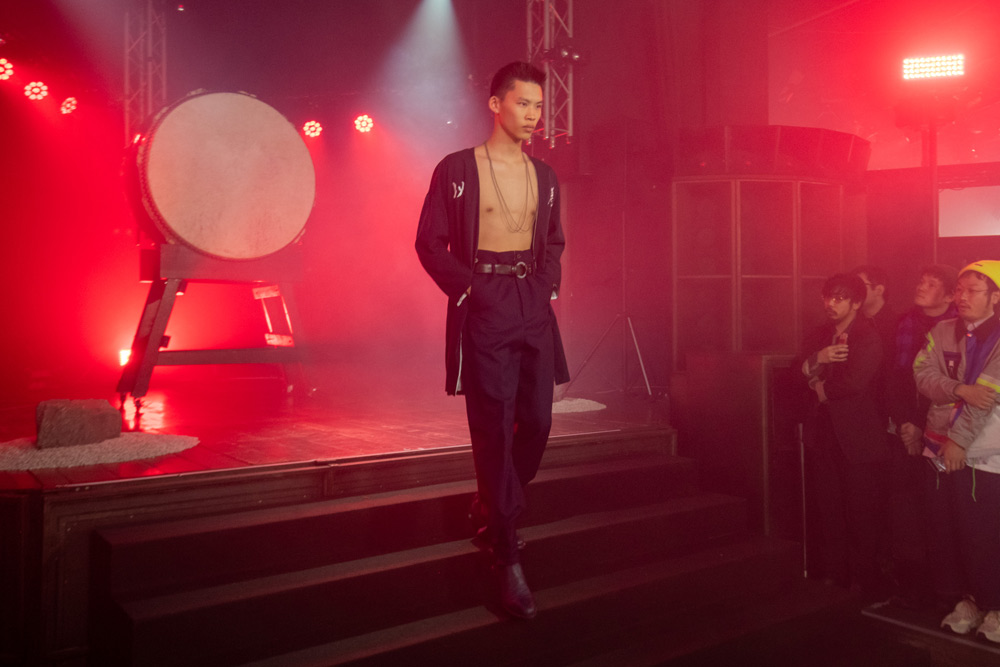 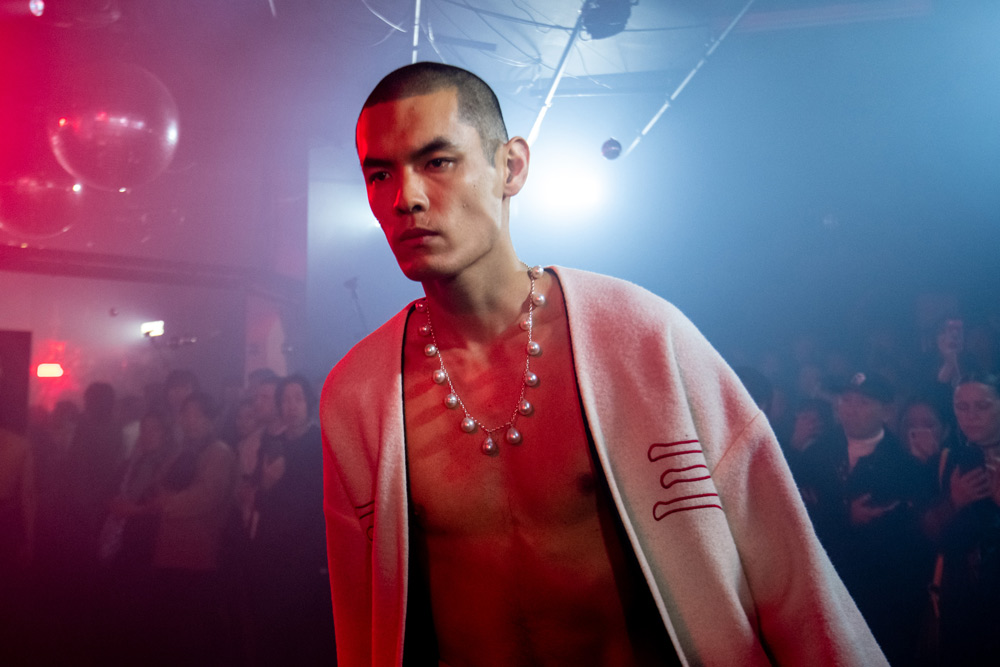 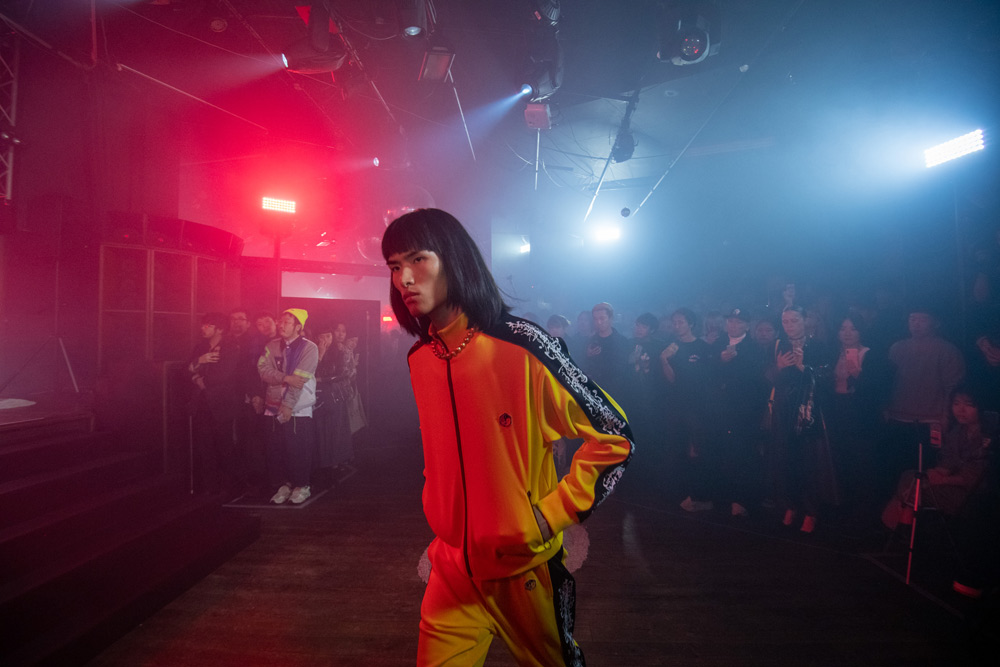 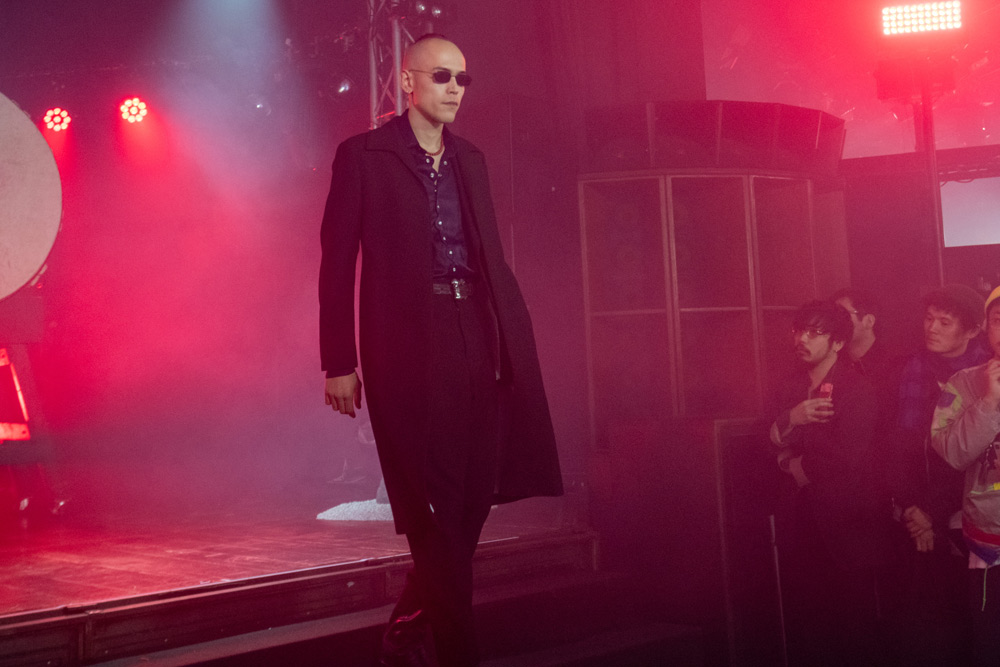 The theme of the whole show was “THE GREAT CITY TOKYO”, which is very straightforward.

AKASAKA: The fashion sensitivity of Tokyo is far more sensitive than any other city, and I think it is a special town in the sense of fashion. When one is inside Tokyo, one tends to overlook this fact and aim for overseas, but I hoped to convey that there should be so much more one can do right here.

KAWANISHI: I grew up in the countryside, so in my youth, the eccentric fashion of Harajuku in the 90’s and the world expressed in magazines was “Tokyo” for me, and I admired it. I thought now was the time that my style would look fresh, so I presented a collection reinterpreting the 90’s Harajuku culture in my own way. 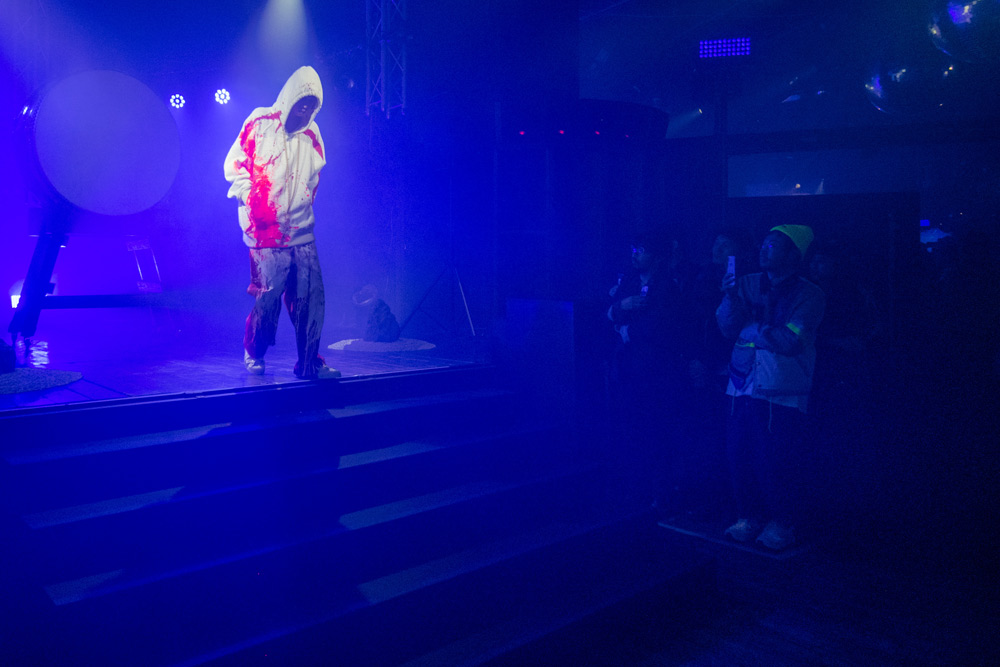 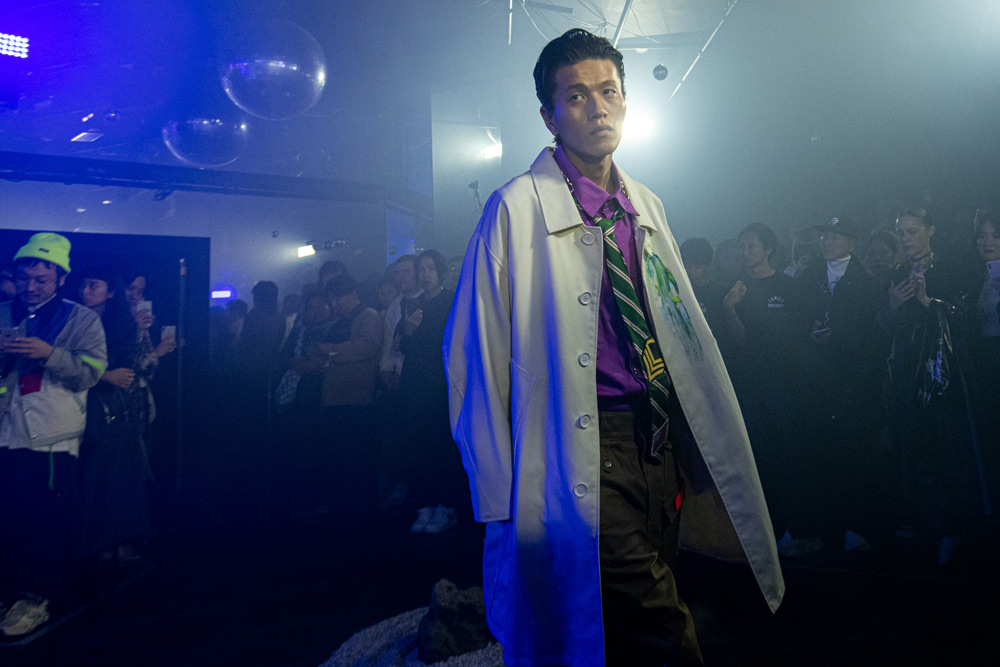 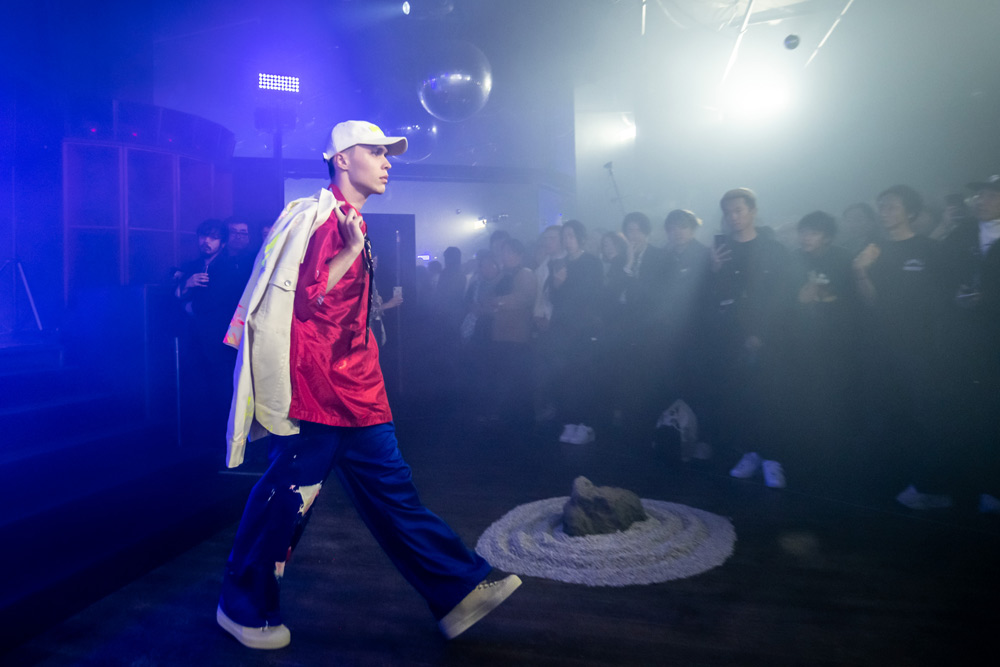 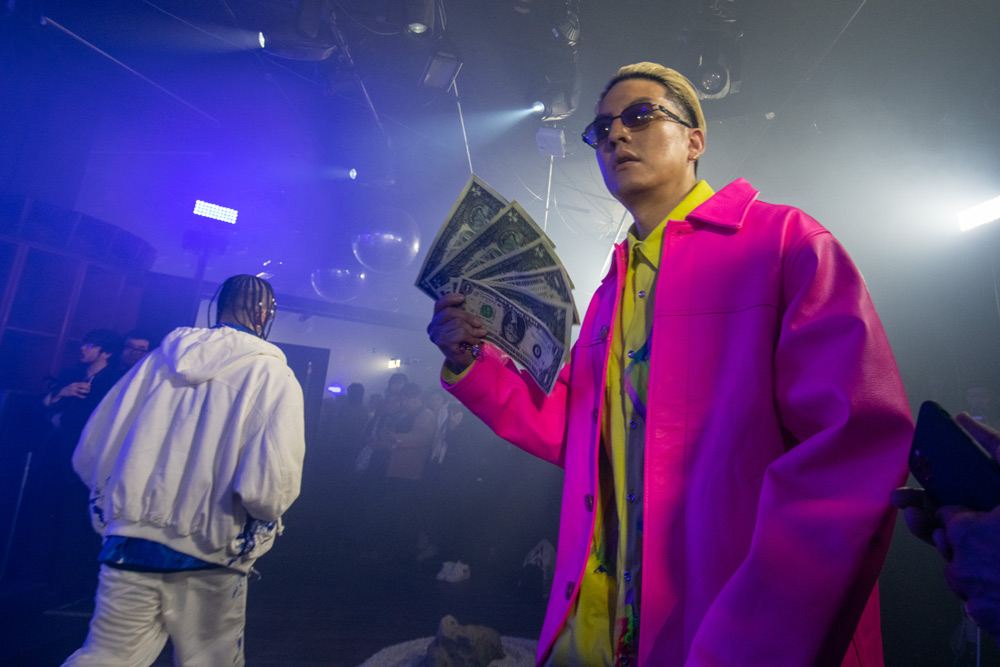 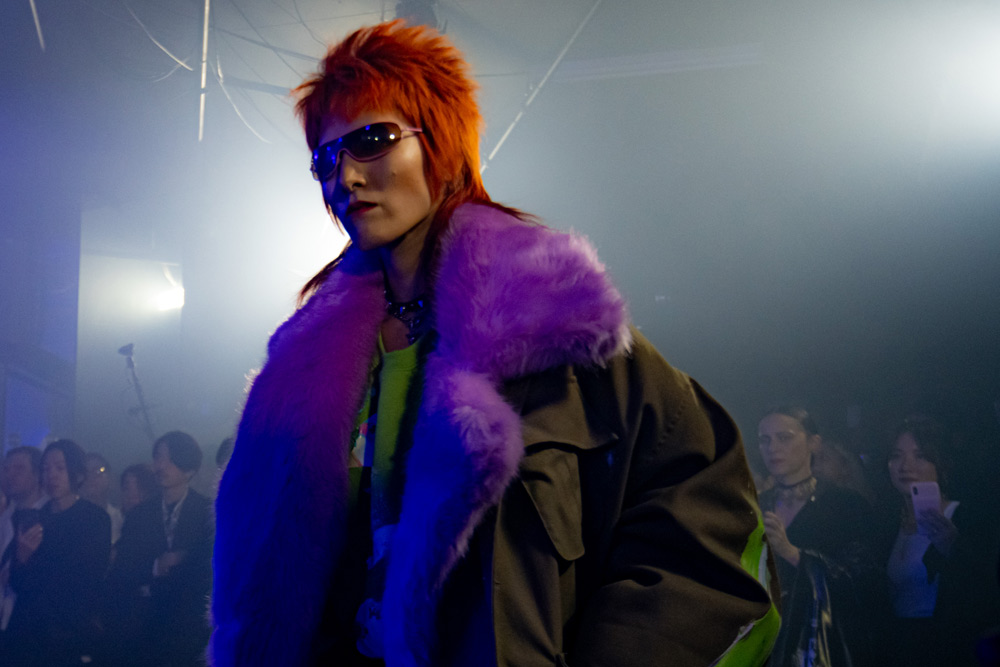 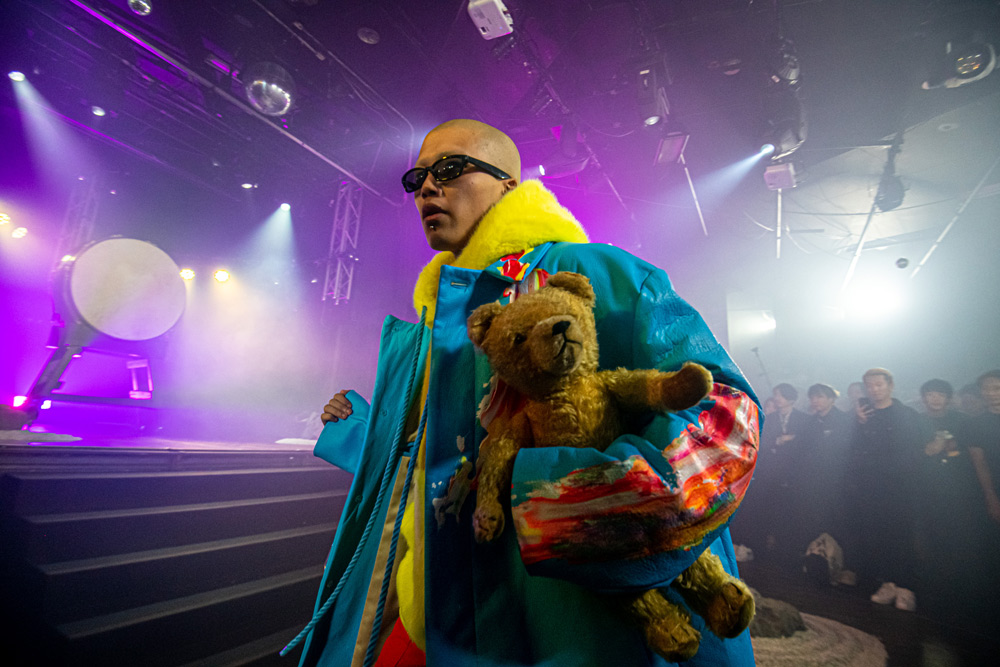 Through doing the joint show, how did you each feel about each other’s work?

AKASAKA: Personality wise, I tend to lose sight of my surroundings when I’m concentrating on something. This time too, there were times when I lost sight of the people supporting me, but on the other hand, Ryohei is the kind of person who is watchful towards surrounding people. Including such aspects, I learned a lot from working together this time.

KAWANISHI: After the show, everybody wanted to take photos only with him, so I was jealous the whole time (laugh). That, I’m only joking, but in truth, unlike him, I always tend to over-think the interrelation with my surroundings, and it can be said that I’m Jack of all trades and master on none. So, as I watched him, I was envious of how he can pursuit his world view in such an inept manner. 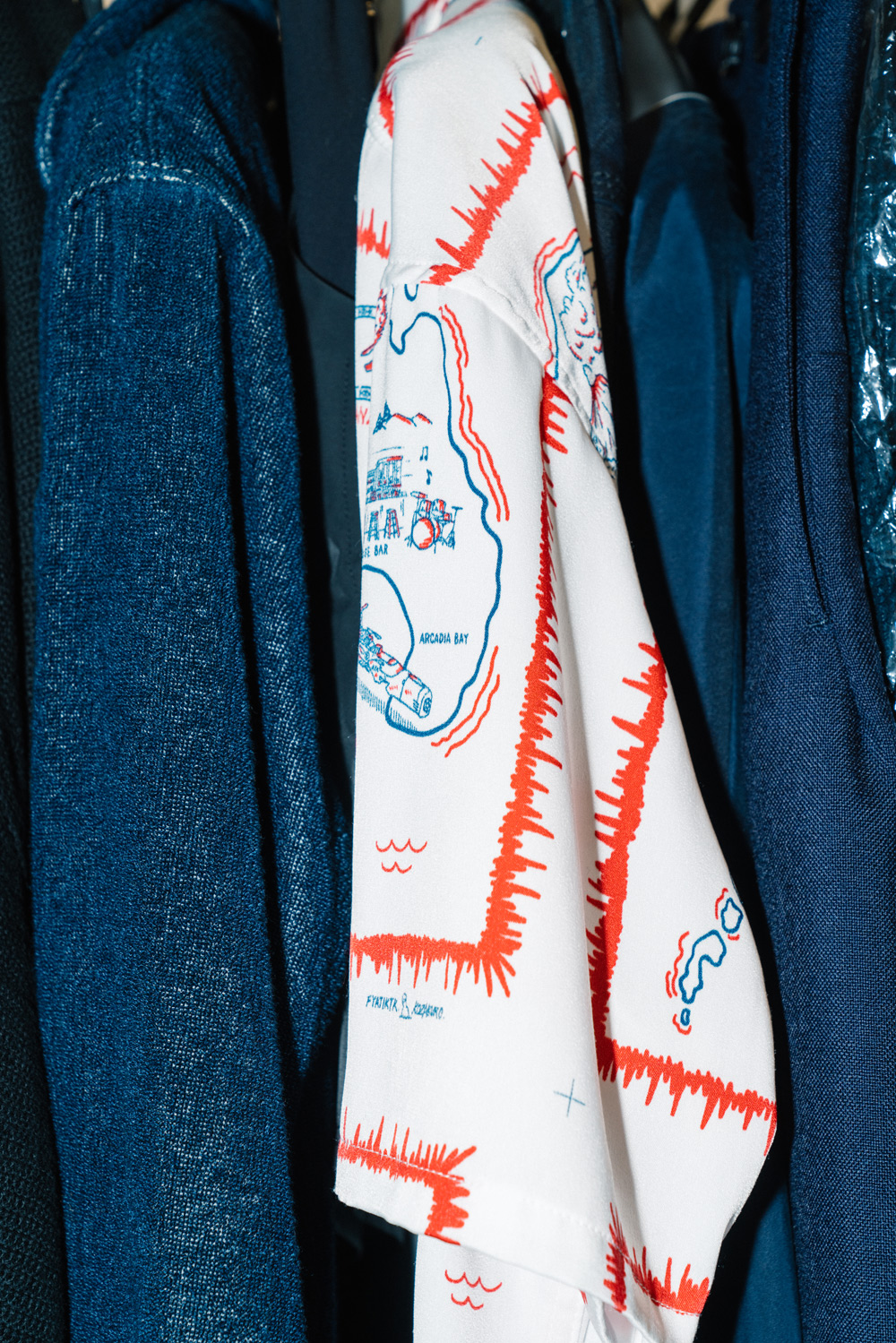 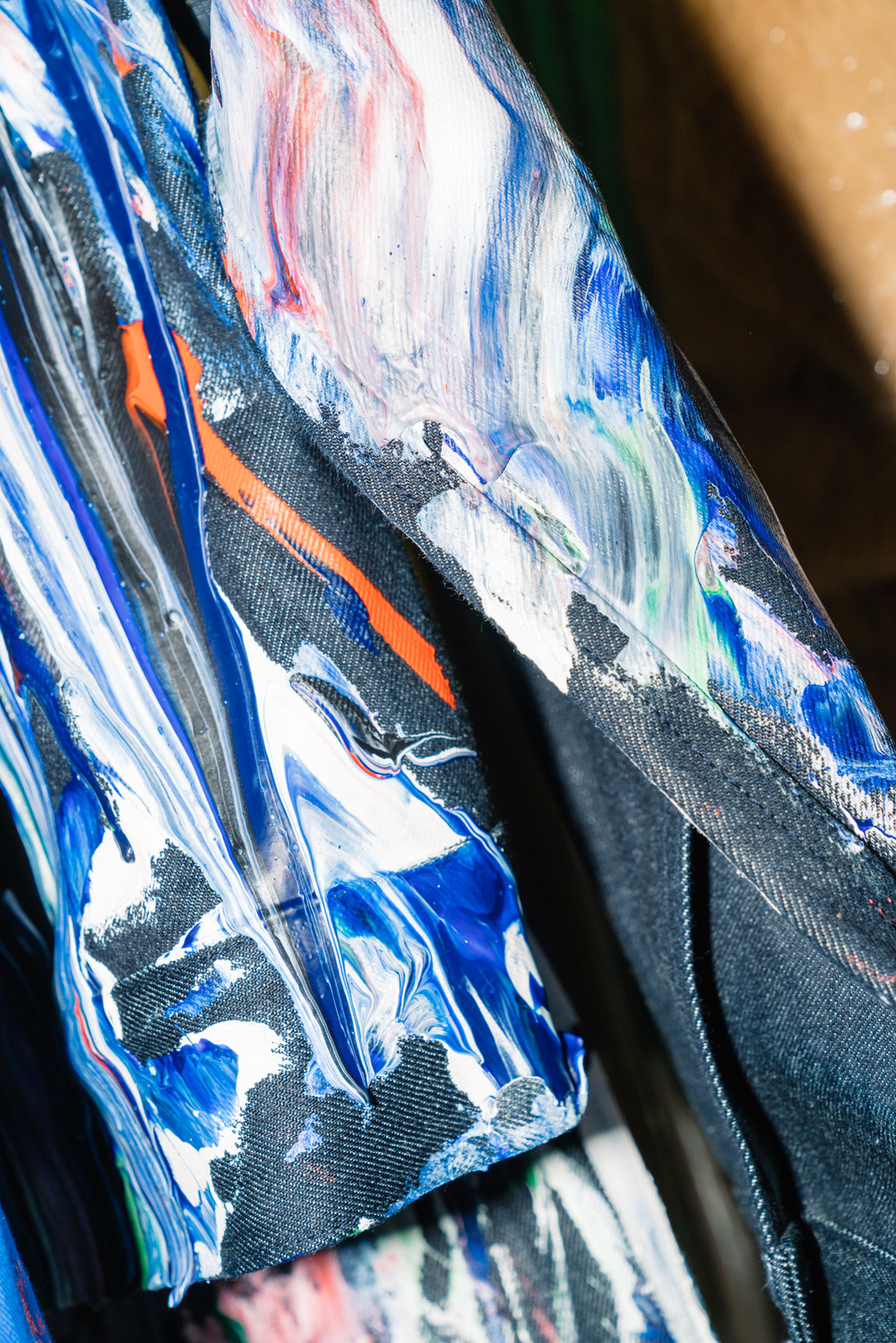 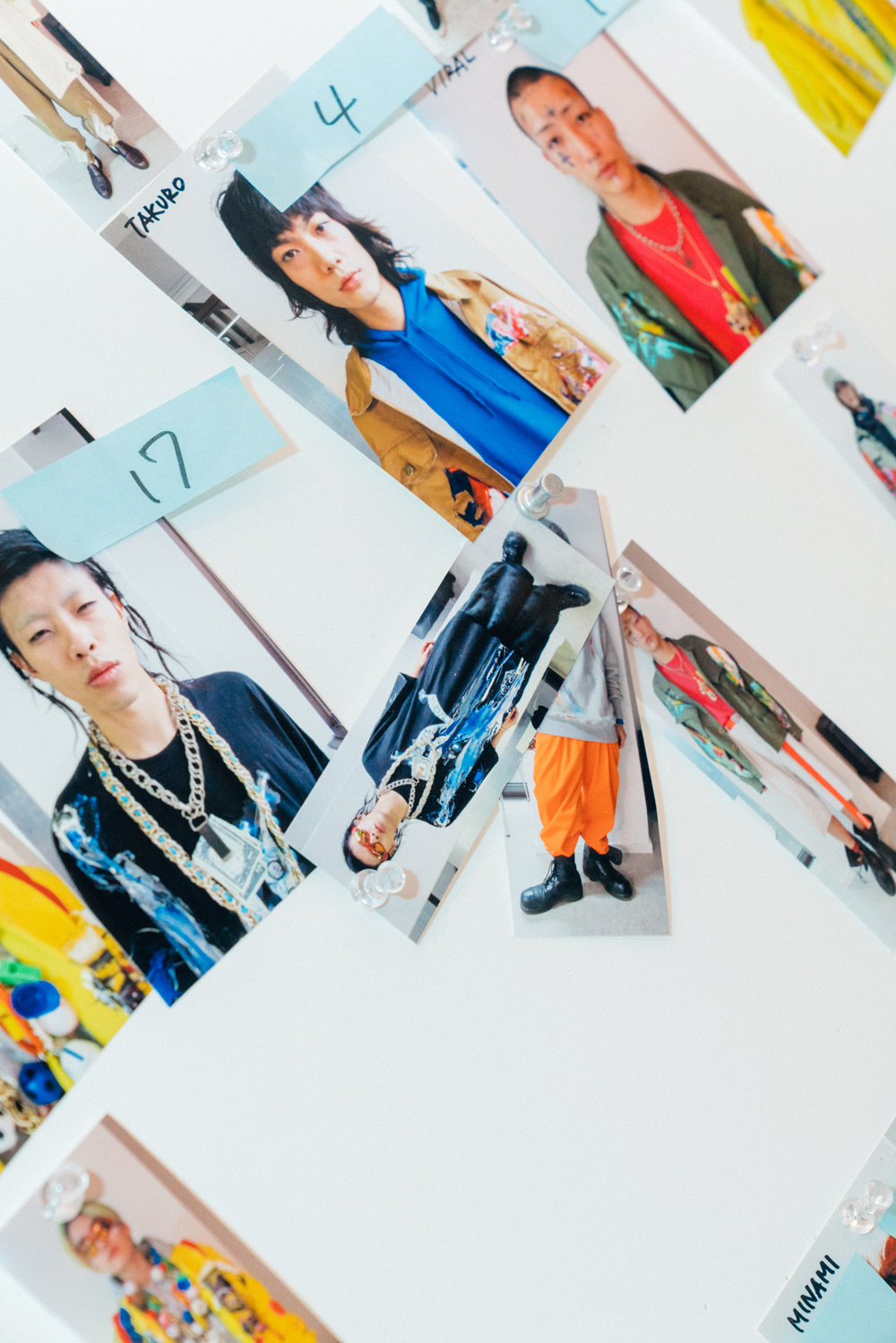 Finally, please tell us your plans for the brand, and/or plans for developments in Japan.

KAWANISHI: If I have the chance, I’d like to do a show at Tokyo again, but if I do it every season, I’m afraid people will get bored, so probably once in a while (laugh). As a brand, I’m not that interested in increasing customers and increasing sales, and I’m happy simply being able to continue what I want to, within the scope of not going bankrupt.

AKASAKA: It’s basically the same for me. It may be because I produce in Japan, but at the moment, developments in Japan carry a heavier weight, but rather than being too conscious of the place, I would like to continue putting the things I’ve seen and felt into shape, and surely delivering that to the people whom are interested in my items. 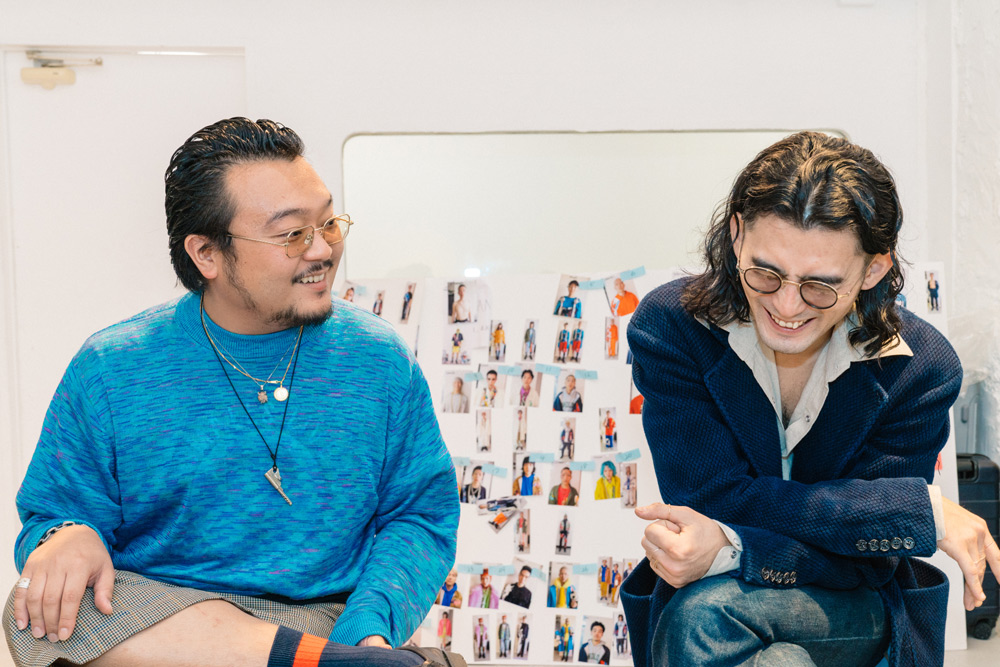