Their shop located at Malmo, the third-largest city in Sweden, “TRES BIEN”is a popular men’s select shop with customers from around the world shopping online. Their original brand is also highly regarded, moderately mixing in an essence of street. Their founder, Mr. Simon Hogeman, and CEO, Mr. Jesse Hudnutt, visited Japan during the Rakuten Fashion Week TOKYO 2020 S/S. Being heavy repeaters, visiting Japan almost every year, we asked them a variety of questions, from their impression of Tokyo fashion week and characteristics of Japanese brands, to their shop in Sweden.

How did you feel when it was first decided you would be coming to Japan by invitation fromJETRO?

Simon Hogeman (hereinafter, Simon): Being invited to Japan this time, was an extremely happy and exciting thing for us. These past 10 years, we’ve been coming to Japan almost every year for buying, but to be honest, we’ve only had one opportunity in the past to see fashion week. We usually go around showrooms, but because each brand has their own timing for exhibitions, we are very thankful for being able to see the creation of Japanese brands collectively in this fashion week.

What is your impression of Tokyo fashion?

Jesse Hudnutt (hereinafter, Jesse): Tokyo fashion has an extremely strong individuality, and I think it is characterized by its challenging styling, compared to other cities. Tokyo has been sort of the leader of individualistic fashion styles since the 1980’s, and we’ve continued buying here, attracted by such aspects.

Is there any place in Tokyo you always visit, or any area you particularly like?

Simon: We often go around the Shibuya, Harajuku, Aoyama area, but recently, in addition to these areas, we often visit vintage shops at Shimokitazawa, too. Also, we always go to Nakano Broadway.

Jesse: When we go to Shibuya, we always visit a select shop called WARE-mo-KOU. We’ve become friends with the shop’s buyer, but we’re also very interested in seeing their curation.

Of all the shows you’ve seen during this fashion week, please tell us which brands were impressive.

Jesse: JENNYFAXwhom presented their show at a game-center was interesting. It was a very fun show, expressed through the eyes of a person foreign to but growing up idolizing the game culture of the 1980’s, a generation idolizing the Harajuku subculture of the 90’s.

Simon: I was impressed by the show of Nobuyuki Matsui. I loved how they mixed in sportswear and other essences into a bespoke like clothes making base.

Compared to that of other cities, were there any points you felt to be characteristic to Tokyo fashion week?

Jesse: I felt it is wonderful how the fashion week in Tokyo is putting strength into supporting young brands. Brands hoping to be active overseas tend to advance to Paris, but many young brands still find it financially difficult to do so. I sympathize with Tokyo fashion week’s attitude of inviting buyers and press from overseas, to create opportunities to have such young brands seen. 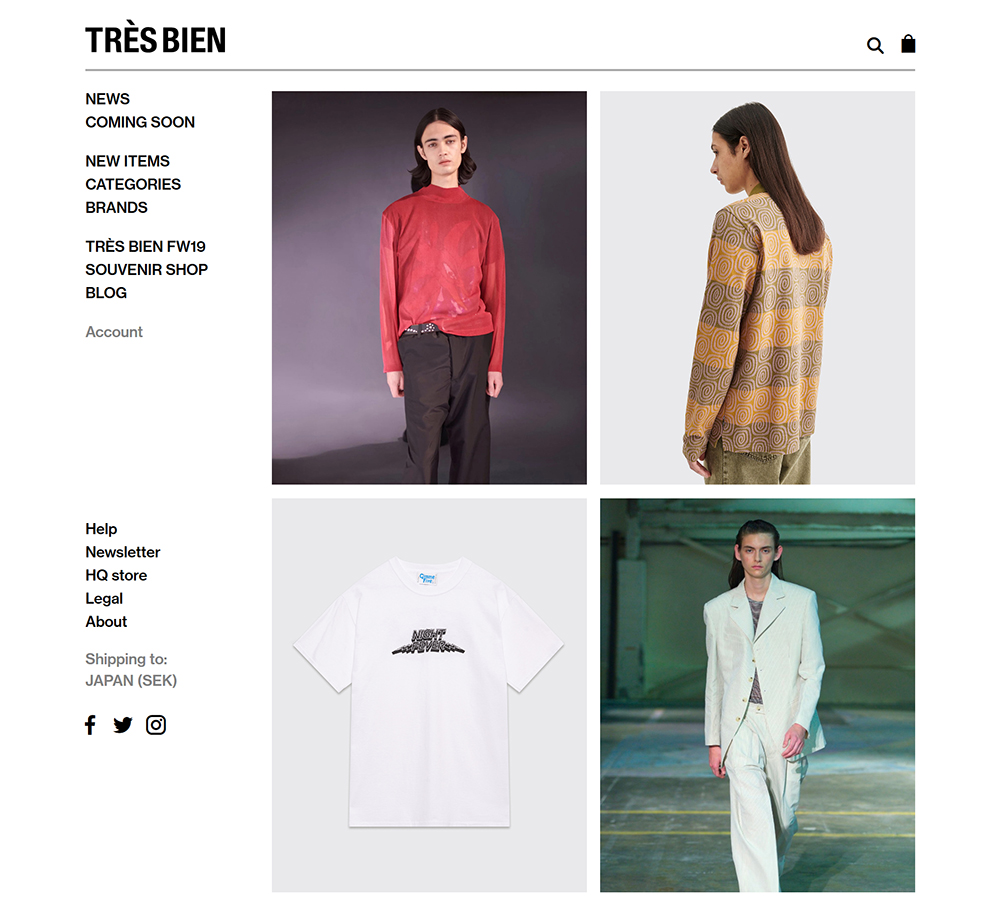 We’d like to ask you also about “Tres Bien”, where the two of you work. First, please tell us about the town, Malmo, where it is located.

Simon: Malmo is the third-largest city in Sweden, but because the scale of the country itself is small, it is a nice cozy town. It is an old industrial area, and at the same time a port town, but in recent years, there has been an increase of universities and venture companies, so the town is changing greatly. It is called the Berlin of Sweden and has such a mood. A small but energetic place, where new topics are constantly being born. I love going to large metropolitans such as Paris or Tokyo, but Malmo is a place I can relax and unwind when I return from such large cities (laugh).

Please tell us of Tres Bien’s concept, and buying criteria.

Simon: Basically, we’ve been particular about handling only items we like, and working with only people we like. As a result of continuing to be true to “what we like”, we’ve become a shop carrying a wide line-up, from contemporary wear to sportswear.

Jesse: I joined the company 3 years ago, so to add from a slightly outsider point of view, compared to other select shops, I think Tres Bien is a shop which places much importance on an extremely personal point of view. Select shops are a business too, so of course there is an aspect of following trends, but in our shop, we’ve disregarded all that, and have remained firm on maintaining an individualism.

Simon: I think Japanese brands are generally received by our customers as being well and surely made, top quality products.

For Japanese brands to succeed overseas, what points do you think need to be cleared?

Jesse: I think, largely 2 points are important. One is not compromising, and the other is to be open to the movements of overseas markets. These may sound like being contradictory to each other, but I think, being true to what one wants to do, and keeping an eye on overseas can coexist. Japanese brands and retailers have built a unique partnership, and I feel they have many different business practices from overseas. That in itself is not necessarily a bad thing, but if one wants to advance overseas, I think it is important to study and learn the business practices of that country, and to have an attitude of cooperating with such practices. 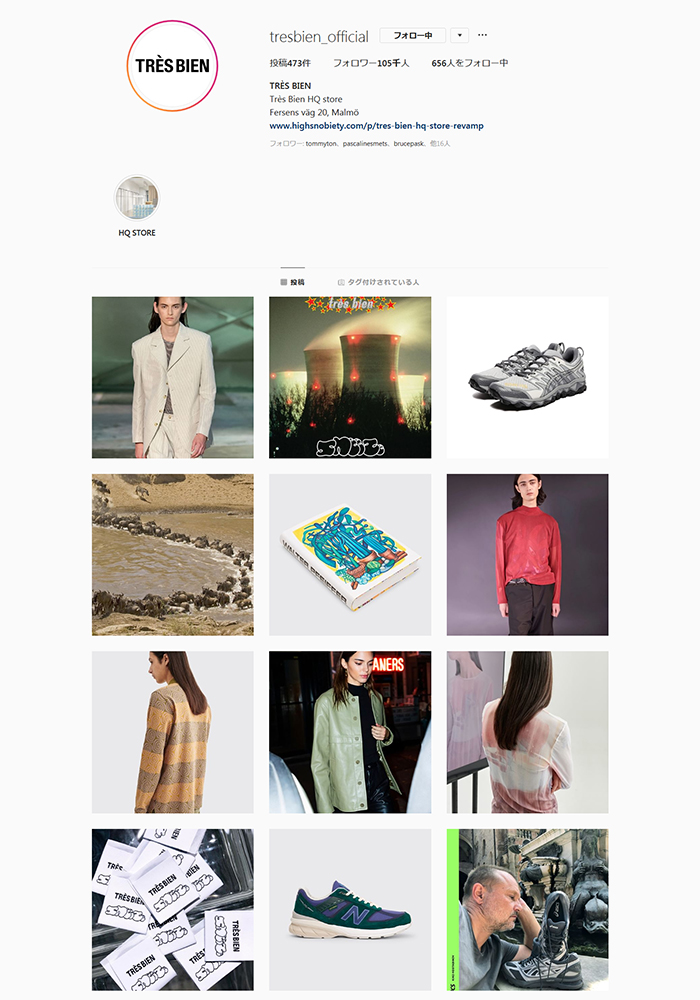 Earlier, we asked you of your impression on Japanese brands. On the other hand, from us Japanese, we have the image that Scandinavian countries, including Sweden, are design big powers. Do you feel any commonality or similarities between Scandinavian production and Japanese production?

Simon: I feel there are various commonalities. For example, even just in buildings, you feel a minimalistic way of thought in both counties, and I think we also share the way we place value on sensitivity. Also, Japanese and Swedish people are both quiet, polite, and have similar national traits, so when I’m in Japan, I don’t feel like I’m in a foreign country. But Japan has a livelier mood, which I sometimes think is a crazy version of Sweden (laugh).

Finally, if there is anything Tres Bien will be putting strength into in the future, or any message you would like to convey, please tell us.

Simon: We started in 2006 as an extremely small shop. After which, our customers gradually began to increase, and today, through online, our customer ratio in now 1/3 Europe, 1/3 Northern America, and 1/3 Asia. There have been changes in such situations, but as we mentioned earlier, our policy of handling only what we like has remained unchanged. However, the things we like are changing over the years, and we feel that our customers have changed along with us, so it is our wish to continue establishing a relationship with our customers in which we can mutually grow together.